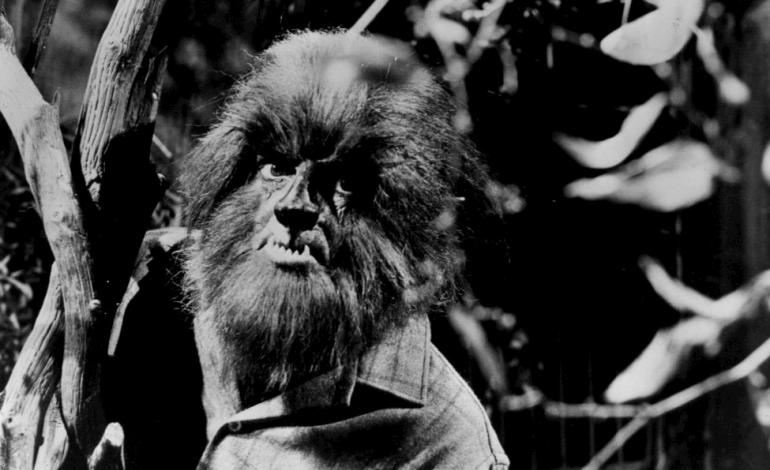 “Even a man who is pure in heart and says his prayers by night may become a wolf when the wolf’s bane blooms and the moon is full and bright.”

When it comes to horror movies, I’m the kind of guy who doesn’t like slasher flicks. You know the kind; a sexually repressed maniac grabs the closest butcher knife and proceeds to carve up co-eds like a Thanksgiving turkey. Nope, for me I like my scary movies with a supernatural edge. Vengeful spirits, demons, vampires and werewolves. But if I were to have to choose between the two favoured monsters, vampires and werewolves, I would pass up morally bankrupt undead pretty boys, with a taste in evening wear and cheesy accents and go straight for the werewolf. For some reason a damned soul that is forced to undergo a horrific change from man to ravenous beast appeals to me more.

Over the last 70 plus years, Hollywood has offered up a plethora of werewolf movies some good like, Steven King’s “Silver Bullet.” To the not so good like “Wolf” starring pleasantly crazy Jack Nicholson. These movies may be great entertainment when you got nothing else better to do; they tend to get it horribly wrong.

The legend of a man making the transition from human to bloodthirsty beast doesn’t find its origins in the misty slopes of the Carpathian Mountains or the windswept moors of the British countryside. The legend of a cursed soul become a horrific monster has its shadowy origins much further back in the cold mists of prehistory. And believe me when I say this, truth is much more terrifying than popcorn fuelled fiction.

Anthropologists believe that the legend of the werewolf may have gotten its start with magical and religious beliefs of early man. Hunters would don themselves in the skins of deadly animals in the hopes of gaining cunning and physical prowess. This Sympathetic Magic was believed to help the hunter think like the hunted. It was essential to clothe and feed the clan or tribe on those frigid prehistoric Northern European nights.

These tales of ancient hunters, researchers believed, were the origins of the werewolf legend. However, many ancient sources from classical Greece have something much different to say concerning legends of seemingly normal human beings transforming into a bloodthirsty bestial killer.

The modern term, Lycanthropy, which is used to describe this transformation, was first coined by the poet Ovid. Ovid, tells the tale of an Athenian King named Lycaon, who was believed to turn into a wolf at night. Ovid described the King’s condition in stark detail, “In vain, Lycaon, attempted to speak…he thirsted fir blood…he raged among the flock and panted for slaughter. His vesture (skin) turned to hair. His countenance turned rabid…his eyes glittered savagely.” Sceptics claim that Ovid was describing a man who suffered from rabies after being bitten by a wolf. However, rabies sufferers don’t grow hair all over their bodies when the moons shine. Clearly, the poet was describing a supernatural condition.

If Ovid’s account is not convincing enough consider the words of Gaius Petronius, author of the Satyr icon. While attending a wedding in 60 CE, Gaius speaks of an acquaintance he met at wedding that showed the philosopher something he would soon not forget.

Gaius recounts that he and his friend left the wedding when the moon raised high in the night sky. When they reached the woods, Gaius watched as the friend removed his clothes and transformed into a wolf before his very eyes and trotted off into the woods.

One last story from antiquity tells us that during the first Olympic Games a race of man beasts called The Nueri participated in their wolf form walking away with all the rewards. According to many of the witnesses, the Nueri were unmatched in physical prowess.

Although the modern image may have its origins in ancient Greece the term werewolf was first used by Gervase of Tilbury in his work, “Otia Imperialis” in 1212CE. Gervase gives many descriptions of men, women and even children who had he magical ability to turn into werewolves. Although many historians believe Gervase was referring to outlaws and not man-beasts.

During the tragic period that researchers called, “The burning times” many alleged werewolves were caught in the frenzied belief that Satan and his minions were lurking behind every corner seeking to turn humans into a tasty meal. During this period, it was believed that man made this transformation using much darker and sinister means. In 1573, a tale of greed and cannibalism came out of France that cemented the idea in the devote Christian’s mind that becoming a werewolf was the work of Satan.

Gilles Garnier was by all appearances a normal farmer until he was arrested and put on trial for the horrific crime of heresy and cannibalism. At his trial, Garnier confessed that as he was hunting in the forest, he met a tall, black clad stranger who told Garnier that if he fell down and worshipped him, the stranger would give him a magical salve and a wolf’s skin. If Garnier rubbed the salve on his skin and wore the wolf pelt he would become a wolf. Gilles confessed that while in this wolf form he murdered numerous children and ate their flesh. Garnier was found guilty and sentenced to burn at the stake for his unthinkable crimes.

In other parts of Europe, being a werewolf was considered a curse handed down by God to a family or single individual. A child born with a uni-brow or a caul, a thin layer of skin on the face, was a dead giveaway the kid would one day be a werewolf. In the event of this, the caul was removed and burned and pierced through the hands with silver nails. It was also believed that if you peeled back the skin of a suspected werewolf you would hair growing. These unfortunate souls were immediately arrested and executed.

It is a common misconception that tales of shapeshifting terrors are found only in Europe. Many Native American tribes have stories of shapeshifting killers. The Dineh or Navajo believed in the dreaded, Yee Naaldlooshii or Skin walker. The skin walker was an evil sorcerer who could shapeshift into animal form using ancient primordial magic. One legend states that entire village of Skin walkers were wiped out when children came up missing believed to have been abducted and eaten by the skin walkers. It is believed that to speak of the Skin walker was to invite its wrath.

Today, modern science accepts the possibility that man can transform into a werewolf. Not physically but psychologically. Lycanthropy is a rare psychiatric condition where the afflicted believes they can transform into a ravenous beast. One famous case, again from France, tells of a man who was arrested and placed in a psychiatric hospital after tearing his friend’s throat out after transforming into a werewolf. When the police found him in an alley covered in blood he was growling and running around on all fours. He even attacked the orderlies of the hospital, beating them severely. One orderly thought he witnessed the deranged man physically transform in his cell.

The legend of the werewolf is our greatest monster, perhaps because he so closely resembles the monstrous beast that lies dormant in all of us.