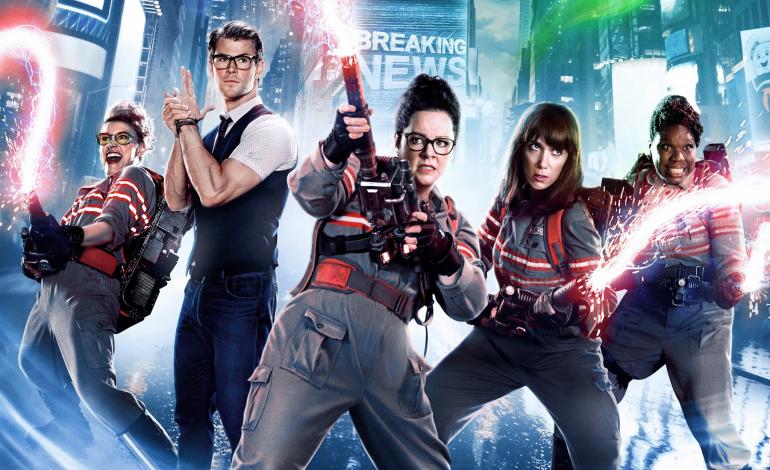 GHOSTBUSTERS REMAKE: It’s finally here! The long awaited fem-version of the 1984 classic film, Ghostbusters, opened July 15th in theatres. The film took in a mere $10.2 million. The reviews are split range with Rotten Tomatoes giving it 73% and Roger Ebert declares a few chuckles with a 2/4. What does that mean exactly? That’s 2 thumbs up and 4 fingers stuck in your mouth to keep you from gagging? Well, isn’t that the comments we’ve been getting from those with misogynistic views on women in the paranormal field? As a female investigator myself, believe me, I wanted this film to be a huge smash at the box office just to prove women’s validity in a male-dominant field. However, I have never been a believer in “remakes”, period. The majority are flops and never seem to outshine the original. When you’ve got something good, leave it alone! Despite celebrity appearances flooding daily talk shows and radio broadcasts, it still has not been well received. As a self-proclaimed film critic, I personally did not care for it. Out of loyalty, I went in support of fav comedians Kristen Wiig, Kate McKinnon, Leslie Jones and Melissa McCarthy. It was heartwarming to see old stars like Aykroyd and Bill Murray, among other big name cameos. If you dig corny jokes that fall flat, go see it. Otherwise, save the change and wait for TV home viewing.

SPEAKING OF GHOSTBUSTERS, I think you will get a kick out of this. Bill Murray’s swim trunks that he wore in the 1984 original film are up for auction on Ebay for an opening bid of $2,020. (£1,500.) We in the paranormal field admire the film for what it stands for. Though, you must admit, it was not a film to be in the range of a “great film of all time”. I believe the theme song sung by Ray Parker, Jr. is probably what sticks in our minds, far more than the film itself. Luckily, I saved a khaki-colored Ghostbusters canteen and a Ghostbusters 8.5” x 11” glossy movie poster my dinner guest had stuck her gum on. Saving it to pass down to my great grandkids one day.

PARANORMAL PHOTOGRAPHY: Let us begin with recent outbreak of paranormal activity caught LIVE on camera (cough cough). Tweeters and Facebookers jumped on the posts-gone-viral. What factually occurred was a fatal motorcycle crash covered by FOX News in Kentucky (U.S.). On-looker, Saul Vasquez, was on the scene and shot the photo in the moment, as first responders worked on the accident victim. In less than a day, over 8,000 hits on Facebook alone had paranormal enthusiasts leaving their comments, ranging from “A blessed Miracle to see Mother Mary ascending over the man”, to “Clearly, this is a reflection off the Trooper’s hat below”. In this trying time in our crazy world, wouldn’t it be nice for this to be an actual miracle caught on camera? For those of us who are more logically-minded thinkers, we tend to extinguish one’s flaming enthusiasm. And then…the pretty red balloon comes in for a landing next to the puppy dogs and rainbows we are hoping for. If you are a researcher who takes the scientific approach, it is important to examine all aspects of the photo before drawing a conclusion. This includes analyzing the physical properties of the photograph –and the camera that took it. Even weather we use while determining what caused the visual of an alleged ghost. There is always the possibility of it being simple pareidolia. DEFINE: Pareidolia (/pærᵻˈdoʊliə/ parr-i-DOH-lee-ə) is a psychological phenomenon involving a stimulus (an image or a sound) wherein the mind perceives a familiar pattern of something where none actually exists (per Wikipedia). We urge you to take a course on paranormal photography, or even general photography. Apply all principles, please, before drawing a conclusion.

PARA RADIO: Congratulations to Paranormal Underground Radio, as they hosted their 300th show on July 7th. The informative hosts are Karen Frazier, Cheryl Knight-Wilson, Chuck Gotski, and the behind the scenes quiet man, Chad Wilson. Missed at the celebration was longtime previous host, our own Supernatural Magazine writer, Rick Hale, who had spun off into his own radio production. I was honored to attend the festivities, as numerous guests from over the years returned to share their congrats. Proven as one of the more popular paranormal radio shows across the globe, the producers have strived to bring the most accurate coverage of news, educational topics, and some of the hottest Para-Celebs from TV, Film and Authors galore! I myself, am honored to be a member of their FIVE-Timers Club for repeat guest appearances. My longtime colleagues/friends have had me cover a wide variety of topics under the umbrella term of Paranormal. I think the greatest message that has been birthed from such a professional radio production is that we never stop learning, whether one is a very green paranormal hobbyist, or a well-seasoned researcher. If you’re an avid fan as I, you may have noticed the development of the hosts, who have morphed into some of the most well-informed specialists in our field. Here’s to the next 300 shows!

DEATH BY GHOST: Just when you thought you heard everything, a story arises out of mystical India. Famed TV ghostbuster, Gaurav Tiwari, was found dead on his bathroom floor on July 7th. We send our prayers of goodwill to his beloved family and friends. The bizarre mystery wrapping around his early demise (age 32) is claimed to be at the hand of a GHOST. Once again, my beloved connection to Spirit leaves me defending those beyond the veil. As usual, the ghost gets a bum-wrap! As none of us are there to apply forensic testing, nor able to bust out our EMF meters, we will have to rely on the good laurels of the alleged murder victim. Perhaps I’m a knit-picker, but I did the math when posts claimed Tiwari had boasted over 6,000 paranormal investigations over a five (5) year period throughout Delhi. Now, I may have struggled with Algebra, but I can count my ghosts up pretty darn well. There are 365 days in a year. 365 x 5 = 1,825. Now, unless he was habitually stalking ghosts, he would have had to do at least five investigations per day. Listen, I’ve travelled all over doing investigations, spanning five decades, I hate to admit. I have done investigations to the level of my colleagues pointing out that I may have a slight addiction to investigating, but by no means could I even put a dent in that number of claimed investigations. Tiwari had recently married and his parents reported that he was a “good boy”. Well, even good boys can go wrong sometimes. Marks found around his neck? I say open a solid police investigation. Should it be proven beyond the shadow-person of a doubt (droll, Robyne…very droll lol) that a ghost ended his life, I promise to fill you in on how they plan on 1.) capturing the murderous ghost…and 2.) keeping the ghost behind bars. Would they give him a LIFE sentence? Oh, someone stop me!!!

HERE, NESSIE NESSIE NESSIE: Steve Feltham marks his 25th year searching for the infamous Loch Ness Monster, better known as Nessie. Since 1991, Feltham, now 53 years old himself, continues his dedication of a life-time to find the little bugger in the eerie waters. Dedication—or obsession? Feltham may be looking for something, but along the way lost his home, job and girlfriend. This unusual researcher follows up on dozens of claims made by others who either visited or live in the vicinity. Covering 23 miles of water, in all these years he has not collected a single bit of evidence himself. What would you do? It sparked a thought in my own head, wondering what could ever entice me so much that I would completely give up my life, my worldly possessions, and the people I love to go look for a cryptid. Perhaps, if he had Johnny Depp’s head on the creature’s body, I just might consider.

PAST LIVES: I came across an update released in May on the most unusual reincarnation case. A Russian boy known as Boriska. Labeled an Indigo child, he claims to be a reincarnated man from Mars. His story goes that Mars suffered catastrophic damage. As far back as age 4, the boy recalled information about Mars’ geographical details years before we even knew. NASA has since verified the boy’s claims, such as proving water exists on Mars’ surface. Where there is water, there is a high potential for the existence of life. During Boriska’s interviews while under the examination of Project Camelot, he described the “Martians’” capability to use telepathic communication, being clairvoyant and empathic. The boy was asked about what he sees for our future. Boriska shared there would be great discoveries made on our planet. A massive knowledge database will be found beneath the Great Pyramid at Giza. There is also a surprise behind one ear of the Sphynx. Boriska goes on to warn us of a massive catastrophe that will hit Russia and take most lives. Scary stuff! To wrap this up on a more positive note, Boriska states that we have 10 chakras, not only 7—and that Martians can see their own souls. They can track each other’s souls by using rocks (crystals?). We once thought of Martians as little green men, but it is not as green as my envy. Like numerous colleagues of mine, I began my Psychic journey at age 4, just as Boriska has. When I claimed I was reincarnated and able to communicate with deceased souls here on Earth, I was given a cookie and told to go play with the cat. Life on Earth or on Mars seems so unfair. (smirk)

UK HAUNTED UPDATE: My on-going para-soap opera, a.k.a. stalking Alex and Miki. Alex messaged me that he cannot give us an interview yet because the dynamic duo is presently filming their next episode at St. Crispin’s Lunatic Asylum. The hospital dates back to 1876 and closed rather recently in 1995, and once housed nearly 200 pauper lunatic patients. It was revered as being one of the most prestigious psychiatric hospitals in the country. By 1940’s, it expanded to hold over 1,000 patients. I briefly looked up recorded hauntings, finding a remarkable photo of 2 apparitions in the third floor window. Here’s the kicker—there is no floor on the third floor! That’s right, you read “no floor”. I cannot wait to see what these cutie-patootie ghost nabbers find there. Stay tuned…

QUOTE OF THE MONTH: “If you want to find secrets in the universe, think in terms of energy, frequency and vibration.” –Nikola Tesla.

IN CLOSING: I hope you’ve enjoyed my reports on some of this season’s ghostly celebs, creepy cryptos and plain old investigator updates. In going forward, I invite our readers to email me with noteworthy topics that you would like me to report on. I hope to keep this a bit dishy, but fun and light-hearted for all. Remember, sharing means caring. Until then, I’ll be haunting you!

Write to: robynemarie@yahoo.com and include “Haunt Topics” in the subject line.