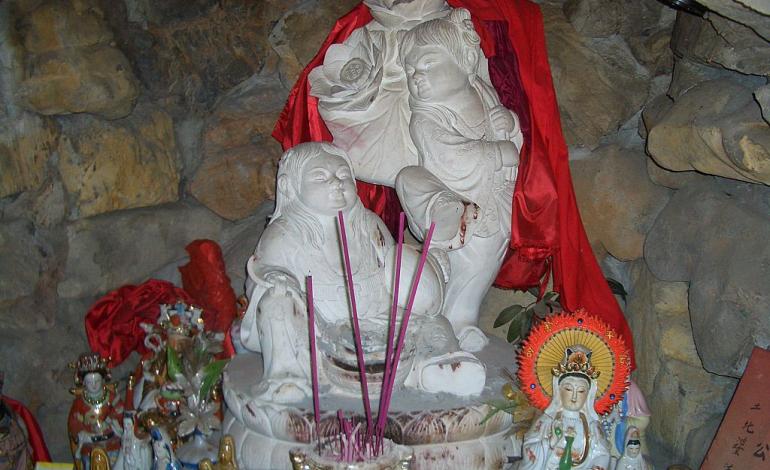 When one hears about spirits and hauntings, it is usually associated with certain locations - homes, castles and land. The stereotypical idea of a haunted house plagued with supernatural activity likely springs to mind. Yet what has surprised me, during my personal research, is the sheer amount of haunted or cursed objects that have effected people.

That objects can have spirit or energy attachment, is an interesting theory. A precious item once belonging to a deceased person, who clings to it as he or she did in life, is perhaps one way that an item might become infused with energy. Or, interestingly, the emotional intensity of the objects creator might somehow become embedded in the fabric of the item itself.

Theories abound, yet the sheer number of accounts that have come to light would lead one to believe that there is something authentic about the concept of items being haunted or cursed.

Ed and Lorraine Warren – famous demonologists in the USA – have investigated true-life hauntings across the world, and often attested to the fact that items can become conduits to spirit energy. So convinced where they, that they often removed what they believed was the offending item and safely stored it in what is now known as their ‘Occult Museum’. Items are tucked away behind glass, and labels affixed to the front, asking people not to touch anything – lest they become troubled by the energy themselves.

Of course, one only has to scratch the surface of such accounts online, and a whole host of legendary stories are available. One of the most famous cases of a haunted object is a painting, by artist Bill Stoneham. Created in 1972, The Hands Resist Him is a painting which seems to unnerve a lot of people. Taking a close look at the image myself, I can see why. There does seem to be something unsettling, and other-wordly, about the painting. I’m not sure if it’s the toy girl – who has come to life – or the disembodied hands clawing at the glass – but there does seem to be something odd about this artist’s depiction.

According to the first owners, the figures in the painting would move around; they claim to even have evidence of this on camera. They sold the painting online, claiming that it was haunted, and even viewers who saw the image online said that they felt ill from viewing the it on their computer. By the time the painting was sold to Kim Smith, its legend had grown across the internet.

There have been accounts of deaths being associated with it, and of people hearing disembodied voices whilst looking at it. Exactly why the painting seems to be a magnet for negative energy – or how authentic these reports are – no one can attest to, but it is one of the more famous cases of an item being cursed.

Similarly, the story of The Basano Vase has grown with intensity on the internet. It is hard separate what is true, from what is legend, but it’s certainly a fascinating story. A young man found this item after digging earth in his yard, and uncovered a 15th century vase. Inside of it, was a note of warning: “Beware….this vase brings death.”

Ignoring the note of superstition, the vase was brought to auction and sold to a pharmacist. The new owner was said to have died within 3 months of his purchase. Following the untimely death, two further people died after buying the vase – and all within months of owning it.

I could not find what happened to his item – stories circulate that is has been destroyed, whilst other online forums claim it has been safely stored by an Italian police officer who believed in energy attachment.

Whether one is to believe such stories - when so much time has passed and so many opportunities for added detail and embellishment has been allowed - is down to personal discretion, but I do suggest that if believers accept that houses and buildings can be haunted, then one should be open to the possibility that objects can contain energy.

One worrying aspect of this area of paranormal study, is the way in which it can be used as a money-making scheme through online auctions and websites. It would appear that many so-called ‘Haunted Objects’ have flooded online markets, leaving one feeling very sceptical.

I have personally witnessed dolls and various furniture items being sold for hundreds of pounds, well beyond the worth of the item itself, on the promise that there is paranormal activity associated with the object.People are willing to pay money for a paranormal experience.

Whilst such money-making schemes obviously do much to discredit this area of study, I suggest we would be too hasty to disregard the subject as a whole. That there have been many accounts of people who have struggled with negative energy after purchasing an antique, or felt under a dark spell of never-ending bad luck after taking in an item into their home, would warrant further investigation.

If a building can house memories and the replaying of moments in time, through stone-tape-theory, then perhaps it is not so far fetched to say that energy can be embedded within the material of an item.

Whilst Hollywood does its part to dramatise stories about haunted objects (The Conjuring, The Possession and Annabelle, to name a few) I hope those working in the paranormal field can look more closely into this aspect of study, and perhaps find solid answers.