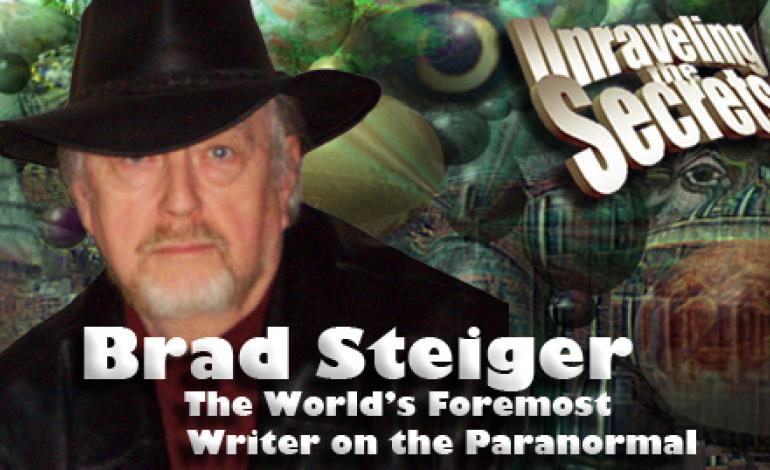 In a Supernatural world comes much responsibility like being a Superhero of a much needed to-be-saved city like Gotham, when spinning tales and stories of the dead, the un-dead and beyond taking precedence where validation and explanation are in need. Let me take you back in my Paranormal time-machine to the early sixties when author Brad Steiger, was one of the influential writers of our time for creating stories based off of research that my father, Dr. Hans Holzer had pioneered. Of course simply not foregoing the plain weirdness factor of getting to the truth of it and what is divided up to become folklore, myths and/or creepy tales.

This noted long-time famed spooky veteran author of such said stories, shares a few intimate moments with me from how he got started to his latest e-book series where the price is just right! For around under $4 you get sixty gripping and artfully designed pages depicting the supernatural real to unreal. Grab a warm bed or chair and blanky, something strong to drink and open up your mind to Steigerisms envisions beginning circa 1965.

Steiger wrote numerous short stories for such magazines as Fantastic, Alfred Hitchcock’s Mystery Magazine, The Saint, Exploring the Unknown, and Fate. His first book was Monsters, Maidens, and Mayhem: A Pictorial History of the Hollywood Monster Movie, followed by the sequel, Master Movie Monsters, later that same year. Next was a collection of articles on the paranormal published as Ghosts, Ghouls, and Other Peculiar People. He has written more than two thousand articles with paranormal themes. Many of his fans began reading his work as youngsters. Steiger left teaching and became a full-time paranormal researcher and writer. Read why below as it gets creepier…

HOLZER: What inspired you to write about the Supernatural?

STEIGER: I guess I was born this way. I grew up in a house with continuing spectral manifestations; I encountered an elf-like being spying on my parents when I was five; I had a near-death experience when I was eleven that presented me with an awesome glimpse of the workings of the mysteries of time and space. If only I could remember all that I was shown, but I recalled enough to set my course as one who would seek to share the awareness that we humans and our minds are other than physical things.

AH: As a fellow writer, we write what we know. Is this true of any of your body of work and if so, which ones?

BS: Of the 170 books that I have authored or co-authored, the vast majority of them have been in the paranormal, metaphysical, or UFO areas of research. Because of my own experiences and my continuing research, I have always written what I know to be my area of expertise. Fortunately, readers have responded to my sharing for over 50 years now.

AH: Can you describe your most impressionable moment in the literary field?

BS: When I sold my first articles on the paranormal in 1956 and in 1966 when I went to New York for the first time and met the editors and writers with whom I had been corresponding for so long.

AH: You often times write with your wife, Sherry. How did that come about?

BS: I have been blessed to have married a woman who is as bright and creative as she is beautiful. Sherry had a rich background of experiences in both the spiritual and paranormal fields. From our first meeting, I was delighted to discover that she had researched, written, and lectured about so many of the same areas that I had and that we shared the same sense of purpose. She is my muse, as well as my partner.

AH: A number of reviewers have referred to you as the “original” Mulder and Scully and suggested that you had well established your own X-Files long before the television series began. You were featured in twenty-two episodes of the television series Could It Be a Miracle?, and together some of your television appearances and specials include: The Joan Rivers Show, Entertainment Tonight, Inside Edition, Hard Copy, Hollywood Insider, and specials on HBO, USA Network, The Learning Channel, The History Channel, and Arts and Entertainment (A&E), among others. Do you think writers of today get as much attention or has it become to commercialized and hand-picked as to who gets known for such said work?

BS: Since our earliest childhoods, Sherry and I have been driven by a sense of mission to share a vision of a greater reality. I emphasis “share.” We do not seek to persuade anyone to accept any of our theories or philosophy. We only ask that people keep an open mind to the other worlds of thought and experiences open to them. For us, the media simply offered another opportunity to fulfill another aspect of our mission. The new eBook series is another new tool that I am using to reach the contemporary hi-tech generation.

AH: You were a high school and college English teacher. What was that like?

BS: I taught high school in the golden Fifties. I loved getting the kids excited about learning and literature. David Drake, the highly successful science fiction author who is on his way to write as many books as I have, was one of my high school students. A few years ago when Sherry and I were autographing books at the American Booksellers Association, I had the pleasure of sitting just a few tables away from another of my high school students who was autographing her book .

AH: You’ve written many gripping stories in the Supernatural genre, yet you also wrote ‘Real Miracles, Divine Intervention and Feats of Incredible Survival.’ Can you tell us what inspired this story as it is very different from your other body of works.

BS: What can be more “supernatural” than men and women pushed beyond their limits to survive seemingly impossible conditions? Individuals who have survived falls out of airplanes at high altitudes; men and women who have survived floods, tornados, tsunamis,wild animal attacks, and ostensible fatal diseases. On one level, the supernatural is simply the world we all live in but do not yet fully comprehend. On another level, it would appear that benevolent beings from other dimensions of reality are genuinely concerned about our future as a species.

AH: Have you any interest and/or aspirations for Hollywood so-to-speak in turning any of your books into teleplays for television/film or do you feel comfortable to keep writing the way you have for so long?

BS: I respect screen writing as another form of artistic expression. I am pleased to continue to practice the craft of writing in my own style of communication.

AH: As a child what did you feel to be when you were to grow up, if indeed you have?

BS: Ha! Yes, I guess I am what you would identify as someone who strives to remember the enthusiasm of the child-self that still exists in my psyche. The only thing I ever wanted to be was a writer, sharing the insights and experiences that I hoped would be of interest to others.

AH: You have begun a new series of short stories in e-book format ‘Real Nightmares’ which I had the pleasure of reading. One’s called ‘Real Nightmares: True and Truly Scary Unexplained Phenomena’ . This is the new thing is it not, e-books?

BS: For years I have been a steadfast disciple of linear type, but now I must pay heed to one of my guiding mottos: “In the beginning was the word, and the word was ‘adjust.’”