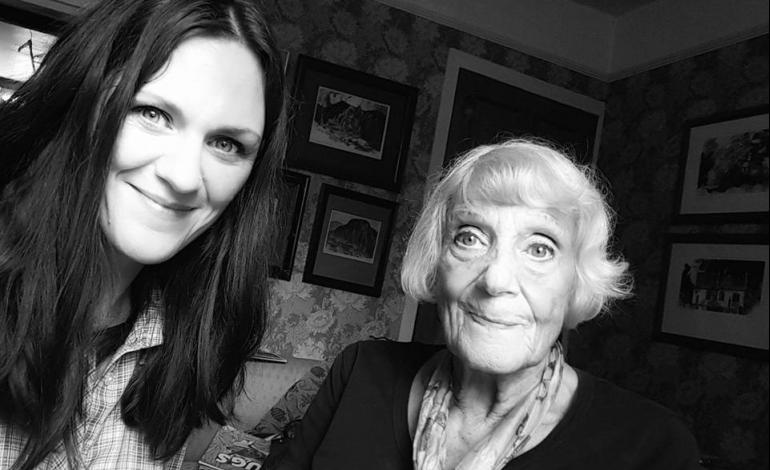 Anne Bradford is one of those women you can’t help but admire. Straight talking, a wonderful memory and an unwavering work ethic. Now retired (she says…although there’s no sign of her giving up writing!) Anne is as passionate as ever about ghost stories and having heard literally hundreds of true life accounts over the years, is it any wonder she cannot leave the world of the unexplained completely behind?

Let me introduce you to one of my hero’s…

Anne, firstly can you tell us how you became interested in writing about Ghosts?

I first became interested in ghosts when I was doing some research in the library and I accidentally came across a collection of local Victorian ghost stories. I realised how valuable they were, how they gave you a glimpse into the past and what people were thinking and saying, the sort of things you don’t get in history books. When I said to the librarian that they should be published, she told me that they often had people coming up to the reception desk saying that they had seen ‘something peculiar’ and wanting to know if anyone else had seen it. She said that the library needed a list of sightings. She noticed that I was intrigued and persuaded me to start asking round about local ghosts.

Do you have one stand out, most memorable story you’ve been told over the years?

I was living in Redditch when it became a new town and while the new shopping centre was being built, it was in the newspapers nearly every week. There were strange noises such as a baby crying and strange incidents - a police officer saw a man walk through metal doors, a cleaner had a machine go right through him, and so on. There was a team of security guards looking after the centre at night. They had to key in at certain places every two hours. One of the guards was walking along the balcony when he saw ‘a guy in a robe-shaped thing’ gliding towards him. Terrified, he rushed into the lift (having to first key it on) and he breathed a sigh of relief as the lift went down away from the balcony. However, when he looked up at the mirrors round the edge of the lift, he saw that the ghost was in the lift with him. After that, he refused to do the night round on the balcony and Philips Security said that they couldn’t employ someone who would only do half the round so they parted company and he went to work elsewhere.

Have you personally ever had any experiences that you cannot explain?

Yes, many. For example, I have male twins and although they are not identical their telepathy makes my hair stand on end. The one went north and the other south and when it’s my birthday there are two identical cards on the mantelpiece! One went to China and married a Chinese girl and the other went to Japan and married a Japanese girl.

I often have telepathic experiences. For example, after I was talking to you (Jayne) a few days ago and I told you about the artist who drew the pictures for my Bella and the Wych Elm story in one of my books. I hadn’t seen him for a couple of years but then, after you’d left, when I switched on my laptop, he’d sent me a message saying that we hadn’t met up for a long time and how was I?!

You’ve attended ‘Ghost Watches’ yourself in the past, have you ever considered yourself a ‘Ghost hunter’?

In no way am I a ghost hunter. I keep away from them as much as possible really.

The book I’m working on at the moment is a children’s history of Redditch. I must confess I have put in an occasional ghost story - some boys like them!

Do your family have an interest in the paranormal?

My family actually dislike the paranormal and complain when I’m writing about ghosts. I think they see it all as quite ‘downmarket’. I’ve always thought that to some people ghost stories are a bit like a tramp coming to live with you. Not quite respectable.

Do you have a favourite haunted location?

Worcester Cathedral is, I think, very ‘other worldly’ for various reasons. It belongs to another time and the carvings suggest strange people in other times. It’s associated with the main events in life, birth, marriages and deaths, what joys and heartaches have taken place here? The gloom gives it a mysterious air. The organ is a strange, humming instrument. I have a number of ghost stories about it.

I won’t ask you to share them now – I’ll let people discover them for themselves in your books!

What is your own personal belief when it comes to Ghosts?

There’s no doubt that unusual things do happen. I sit selling books at fetes and fayres and people come up to me and tell me all these strange tales. The weird thing is that many of them are the same, for example, phantom footsteps, electricity being turned on and off, water appearing where there are no taps, ghostly figures appearing and disappearing and so on.

There are explanations for some of these experiences. For example, there is a state between waking and sleeping where you think things are real but you are dreaming. This explains the white lady sitting on the bed. Also, there’s no doubt that certain people attract poltergeists but no-one knows why. Again, perhaps ghosts are a telepathic image, in fact I‘ve heard instances where that’s definitely happened. However, what gets me, are people who can see into the future. A husband phoned me up a few years ago and asked me to have a word with his wife as she could predict the future. I interviewed them both and she absolutely could! There’s absolutely no answer to that.

Finally, why do you think so many people are interested in Ghost stories and the paranormal generally?

For the same reason, I suppose, that people are interested in the under-water sea, the strange behaviour of animals and the other-worldly battles on the television. It’s something that we don’t quite understand and yet it should be within our grasp. I wonder what’s stopping us.

Anne it’s been an absolute pleasure talking to you, thank you for your time!

If you’re a fan of real life Ghost stories Anne’s books can be found on her website www.huntendbooks.com for the SPECIAL PRICE of £6.00 each (+p&p) when mentioning ‘Supernatural Magazine’. (RRP £9.95 each).