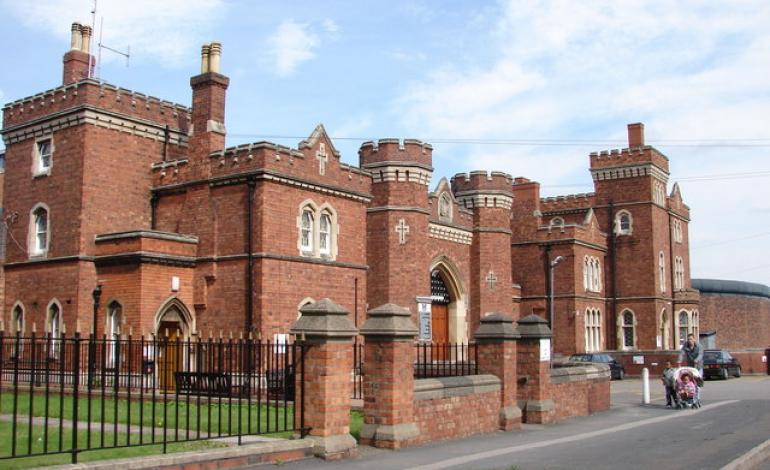 “The city of Lincoln is famous for its beautiful cathedral as well as being home to the Magna Carter. As I walked along the cobbled streets towards the castle, I thought about all the ghost stories I had heard about the Bailgate. For those of you who don’t know the Bailgate are the oldest part of the town, and are located near the cathedral. People have said that they have seen a horseman in the middle of the night ride through the gates of the castle. Also a figure of a man wondering around the town. Browns Pie shop, Grease stone steps, The White Heart Hotel, Court room, are other haunted locations.

Entered the gift shop to purchase my ticket for the day, before embarking through the prison. This was the first time I had gone to the prison on my own, so I was looking forward to seeing what sort of “vibes” I would pick up.

In the Victorian times the prisoners attended Church services. In the chapel room they would sit in individual “boxes” I refer to them as boxes because they would not be able to see who was sat near them, they could only look forward. For example horses sometimes wear “shades” so that they cannot see anything but the front of them. The prisoners would be told countless times that they were all going to hell and their souls were dammed because of the crimes they had committed.

As I walked up the stairs to the chapel a strange feeling washed over me. It felt like I was about to enter a room that had lots of people in, even though I was about to enter a room which was deserted and full of mannequins that represented the Prisoners. As I entered the room I looked around in awe. I felt like I was being watched constantly and it wasn’t a very nice feeling. As I walked down the steps and up to the pool pit (Where the vicar would have sat) I was overwhelmed by all the spiritual energy I was picking up.

I had never sensed such a strong energy field before and I didn’t know how to handle it. There is no air con in the chapel room and so I was quite surprised to feel a very cold breeze sweep across my legs. It felt like someone was “in my face” and was following me around the room. As I started to walk up the steps to the pit, I had to stop. I was recording my experiences in the room for my YouTube channel. I looked around the deserted room and tried to calm myself down. It felt like the Prisoners were scrutinising every move I made, I could feel so many emotions coming from them. One of the emotions I felt from the spirits was curiosity and anger. I felt like I was under attack in a way because the energy was so intense.

I didn’t make it up to the pit, even though I was one step away from it. I had to ground myself because I was starting to feel dizzy. I was in a sort of trance with all the emotions I was being bombarded with, It was like a thousand people were trying to get my attention all at once, and were connecting with me by “walking into my energy field”

I couldn’t physically move from the step that I was on which was strange. However after a few moments I plucked up the courage to walk down the steps and hurry out of the room. Noticing that I was a bit panicky one of the staff members asked if I was Okay. I explained to her that I could sense spiritual energy and the chapel room was a bit intense. She agreed that it had a strange atmosphere, and I was not the only one who had experienced it.

After walking through all of the prison I went to see the Magna carter, which is situated outside in a small house. No photography was allowed for obvious reasons. Feeling drained from the energy in the prison, I made my way down the stairs to where the Magna Carter was. I felt abit silly not having seen it before. I went to school In Lincoln and college so there was no excuse to not visit it.

Entering the darkened room, I walked up to the glass cabinet it resides in. I attempted to try and read the writing however the parchment was so old that I couldn’t. I felt very privileged to see the Magna Carter, because it plays such an important role in our English history. It is worth a visit if you ever get the chance to come to Lincoln”