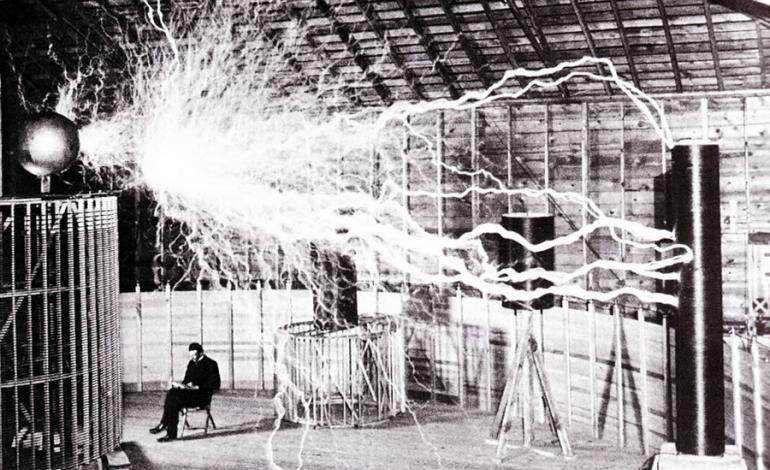 • Read the story of how legendary inventor Nikola Tesla inspired an associate named Ralph Bergstresser to harness the purple healing rays of the universe to treat many forms of illness and pain.

• Can simple purple aluminum plates serve to cure the ills of those who use them to ease their suffering? There are many that say they can and who offer themselves as living proof that the method works!

• Authors Tim R. Swartz and Timothy Green Beckley have long been searching for the truth behind the mystery of Nikola Tesla. Are we to add the words “healer” to Tesla’s long list of accomplishments?

When I finished reading the latest Tesla-related book from Timothy Green Beckley’s Inner Light/Global Communications publishing house, entitled “The Miracle of Nikola Tesla’s Purple Energy Plates,” I was reminded of a cartoon in The New Yorker Magazine from several years back.

The cartoon depicted two scientists gazing at a blackboard with a complicated equation etched in chalk, the kind of exercise in higher mathematics that leaves most laypeople utterly baffled and uncomprehending. Amid the sea of numbers and mathematical symbols are written the words “Then a miracle happens.” One scientist points at the words on the chalkboard and says, “Maybe this step should be a little more specific?”

Like most New Yorker cartoons, it’s not exactly a knee-slapper, but it still helps to illustrate how one may respond to “The Miracle of Nikola Tesla’s Purple Energy Plates,” authored by Tim R. Swartz and the aforementioned Timothy Green Beckley.

The titular purple plates combine the two factors illustrated in the New Yorker cartoon – advanced scientific calculations that are kick-started into reality by a miracle.

UNDER THE WATCHFUL EYE OF THE FBI

The book opens with some remarks from Swartz, who recounts that after Tesla’s death in 1943 the FBI confiscated all the late scientist’s papers and notes from the hotel room in which he lived out his final impoverished days.

In recently declassified FBI files, according to Swartz, “There is mention of Ralph Bergstresser a friend of Tesla’s who reported to the FBI his concern that foreign agents may have targeted Tesla to steal his notes and inventions, or possibly even kidnap him.”

Bergstresser’s relationship with Tesla is important because he is the actual inventor of the purple plates that were a later product of Tesla’s medical experiments in “electro-magnetic healing.”

The reader will of course recognize that Tesla is the genius who gave us alternating current and a wealth of other vital inventions that we now take for granted. But the new book focuses on just the purple plates and their healing powers, that mysterious blend of technology with the seemingly miraculous.

It should perhaps be pointed out that Tim Swartz has long been associated with the life and study of Nikola Tesla. His previous work, “The Lost Journals of Nikola Tesla,” has gone through several editions, been translated into Romanian and has often been quoted, being one of the best sources on Tesla’s outstanding accomplishments and the attempt by many to squelch and steal – particularly upon his death – his valuable contributions to the world. Swartz has been questioned about his findings on numerous podcasts and radio shows, such as Coast to Coast AM. Recently he was interviewed as part of a History Channel mini-series “The Tesla Files.”

To return to the story of Ralph Bergstresser: He was himself an electrical engineer who met Tesla in 1943 with the idea of the two working together to create some form of weapons technology that would hasten the end of the Second World War.

“Bergstresser was impressed,” Swartz and Beckley write, “with the knowledge, demeanor and deep, abiding, humanitarian ideals of Tesla.”

HOW FREE CAN ENERGY BE?

Tesla imparted to Bergstresser the concept of “Free Energy,” an admittedly ambiguous term which defies any standard or concrete definition and that might not be fully understood with our clumsy 21st Century knowledge of cosmic laws.

Tesla believed that, given that the universe at its most basic level consisted of energy, it should be possible to tap into that energy as a power source that could serve all of humanity at no cost. Thus it was to be “Free Energy,” not the money-consuming energies provided by coal, oil and gasoline.

“With this, the torch of enlightenment had been passed on,” Swartz and Beckley write. “Bergstresser soon blended the futuristic thoughts about frequency and his own expertise to serve humanity and spent the next 20 years of his life committed to breaking through the veil of matter to access free energy.”

By the early 1960s, Bergstresser felt he had succeeded, in spite of years of ridicule intended to repress his research. He introduced the Tesla purple energy plate to the world. He had chosen an inexpensive medium (specially-treated aluminum) that would act as a transceiver that both drew in and radiated out Universal Life Force Energy, or “Free Energy.”

WHAT THE PLATES HAVE ACCOMPLISHED

As has been explained by the inventor: The plates have enhanced and benefitted anyone or anything that was in close proximity to them. The plate was not charged like a battery, so it could never be discharged. The plates are a beautiful violet color and are a window into the Fourth and Fifth dimensional energy fields. They radiate Life Force Energy (Chi/prana) for a distance of 10 to 18 inches. In no way can these plates be harmful.

The positive universal energy generated by the plates is said to accelerate the healing of burns, cuts, aches and other troublesome pains. They can also raise a person’s energy level. This is an example of the higher energy used by faith healers down through the eons. The plates create a positive energy around themselves that will penetrate any material substance by osmosis. This energy is said to be beneficial to all life: plant, animal or human.

The plates are anodized aluminum, meaning they have been coated with a protective film which makes the metal more amenable to the purple coloration. Meanwhile, the color purple is considered the healing ray of the rainbow spectrum.

These plates will help to raise the vibrational rate of any individual using them. Many people place their food on the large purple plates, when they are still in paper sacks from the market, to keep their food fresher, longer. Some people sleep on these plates by placing them under their mattress to help give them more stamina and vitality and relieve tensions. No medical claims are made or implied. They are said to have benefited those individuals who have placed them on injured areas of the body. A certain heightened degree of hormonal intimacies among couples has also been reported. This would be similar to the energy generated by Wilhelm Reich’s Orgone Accumulator.

Though having none of the same properties, and not working on the same principles, Tesla’s plates have become very popular among those working with the devices known as the Black Box or the Rife Machine.

Indeed, the possible uses for the plates are many. Just carry the small plates in your pocket or purse or near your bedside or front door for harmony, or in your car while out driving to assist in avoiding stress and fatigue. Better yet, wear the discs as a necklace or earrings. You will find many testimonials in the pages of this book given by those individuals who are convinced that the plates, as inspired by Nikola Tesla, have enhanced their all-around well-being. The book includes a chapter by Dr. Roy Kupsinel, who visited Bergstresser’s purple plates factory and was amazed by what he saw.

“Orders for these purple energy plates are pouring in from all over the world,” Kupsinel writes in Health Consciousness Magazine. The doctor now declares that he has used the purple plates himself and has recommended them to other people, who are most appreciative.

The reader may be surprised to learn that Tesla himself was a pioneer in a field of medicine called “Electro-Therapy.” Tesla was one of the first electrical engineers to pay attention to the physiological effects on humans of high frequency, high tension currents. The careful application of electric energy could produce many positive medical results. In fact, Tesla used such a method to treat his own depression.

But Electro-Therapy soon drew the ire of the pharmaceutical companies and the American Medical Association. The innovative work done by Tesla and others was officially reduced to the level of “quackery” in the West, but during the Cold War years Soviet scientists built on Tesla’s research and practiced their own form of Electro-Therapy successfully.

“The Miracle of Nikola Tesla’s Purple Energy Plates” concludes with the testimonials of several satisfied customers.

For example, Karen D. of New Jersey writes: “I want to tell you how much your products helped. I have a torn rotator cuff and it is painful and limits my motion. Within 24 hours of wearing the quartz bracelet with the purple disk the pain was completely gone. A boy who had brain surgery for a tumor and is now prone to headaches asked if he could use the small plate. It helped him and I gave it to him. Thank you for your time and help. Thank you for a miracle product.”

“I just received a purple plate pendant from a good friend of mine. I was a pretty huge skeptic and was sure this stuff was absolute crap. But I was wrong! Your product has really changed my life! Not only has it shown a profound effect on me, but I’ve noticed my family is now in a better mood and the vibes given off from this thing are showing that it is working. I also placed the plate under a cup of water and it made the water taste so much fresher and crisp. My three-year-old cousin said something to me the other day that completely shocked me. She said she could feel the pendant shaking and it really freaked her out. Is there something that children can see and hear that we adults can’t? I’m amazed! Thank you for this amazing product!”

Yet another testimonial, from Thomas McNair of Washington, D.C., seems to have medical evidence to support it:

“I have a story to tell you. I had been having pain in my abdomen and was successfully using a small plate to ease the pain before my scheduled surgery. I had to get x-rays of my torso area before the operation. On the x-ray there was an illuminated rectangle area in the shape of the plate I had been using for the pain! The technician was mystified, but I knew exactly what it was – the energy was still there, helping with the pain. I found this to be amazing and now I have proof that the energy works! THANK YOU!”

And so we are left to wonder about the purple energy plates of Tesla and Bergstresser. Are they the perfect marriage of man’s technology and the miraculous healing energies of the universe? Will they actually relieve pain and re-energize the fatigued and the depressed?

Without FDA approval, one is forbidden to make such claims. But for a relatively small investment you can give the unknown a try.

Beckley and Swartz are constantly expanding upon their findings on Tesla’s purple energy plates and invite others to participate with them in their research by working with the plates directly. Further information may be found on their web site: www.TeslaSecretLab.com

The Experiments, Inventions, Writings And Patents Of Nikola Tesla: Master Of The Cosmic Flame

And visit our YouTube Channel for over 200 video presentations – “Mr. UFO’s Secret Files”