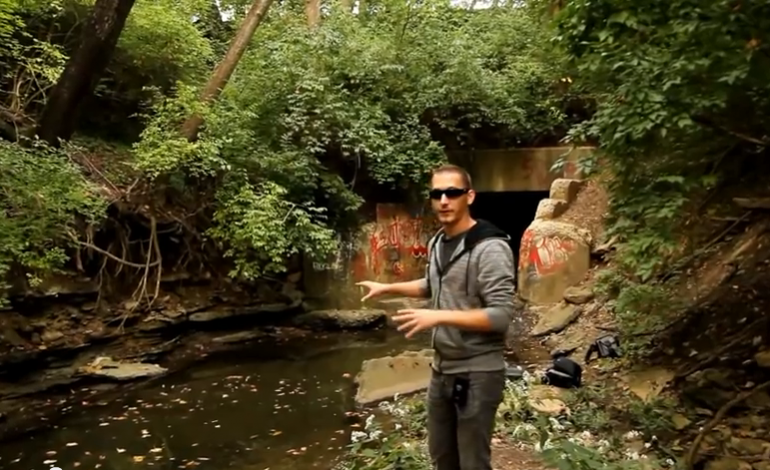 I have been on countless investigations at hundreds of different locations and I can say that “Satan’s Hollow” is one of the spookiest out of them all. Sitting in Blue Ash, Ohio in the middle of the woods is an isolated location that has gained local legend status over the past few years. Rumors of devil worshipers and sacrifices have spread nationwide and attracted many visitors. The story tells of an “altar room” within the tunnels where these evil ceremonies took place. There are also stories of a demon which haunts the tunnel known only as “The Shadow Man”.

I am a huge fan of isolated locations. The more cut off from the public the better. The more dangerous or claustrophobic a location is, the more I actually get spooked resulting in a more entertaining video. Satan’s Hollow was the perfect spot for this. John and I had a bit of trouble finding it at first and almost gave up our search. We entered the woods at sunset after a long road trip. We began our search in the wrong direction. John had a feeling we were going the wrong way so we turned around. To our surprise the entrance to the tunnels was very close to where we entered the forest. The outside of the first tunnel was covered in colorful graffiti. As we approached the entrance we first noticed a loud echo when we spoke. Anything we said would echo down a seemingly endless abyss of darkness. The ground was covered in about an inch of water but the water was still and unmoving.

We filmed a short intro outside of the tunnel and headed inside. The air was heavy and smelled of old water and mildew. The first tunnel was very wide open. Graffiti was again everywhere, getting progressively more sinister with tags such as “GO BACK” and “HELL LIES AHEAD”. We pushed forward with the intention of finding the “Altar Room”. We made a sharp left which took us into the second series of tunnels. This is where everything began to change. The ceiling dropped down to just a few inches from my head. The walls closed in around us and immediately everything felt more claustrophobic. The air grew thicker and it was obvious that oxygen levels were lower down here.

We pushed forward for what seemed to be forever. Time always moves slower when you’re miles underground in pitch darkness. Finally, we came to an open square room. There were creepy “religious-like” markings all over the walls. It looked like something you would see in an exorcism film. The scariest part of being in this location was how screwed we were if some bad people entered the room and wanted to do us harm. We were, at the time, unarmed and there wasn’t an easy escape route. We were miles underground and stuck in a room with only one exit and one entrance.

We begin to hear strange noises in the water. Now the energy was totally different and even John was a bit spooked. If you watch our videos you’ll learn that this doesn’t happen very often. The noises sounded sort of like footsteps, treading quickly towards our direction in the water. We both stood silent staring into the darkness, simply waiting to see what would happen next. To our luck, the noises subsided and we continued our investigating.

John turned on the spirit box and we began to ask questions to whatever spirits may be lingering around. Til’ this day it was one of the most responsive box sessions we ever had. There was an evil and intelligent spirit in those tunnels and it was happy to have a conversation with us. After asking around 20 questions and receiving a direct intelligent response almost each time, we decided to head out. Normally, we would have continued on, experimenting with different devices and attempting to catch

EVPs. In this case I decided to call the investigation short as the responses we were receiving through the spirit box were extremely negative. The voices coming through claimed to be the devil himself. They confirmed there was a shadow man haunting the tunnels and that a man named Jake had been sacrificed down there. https://www.facebook.com/TheRealDavidScott?__mref=message_bubble