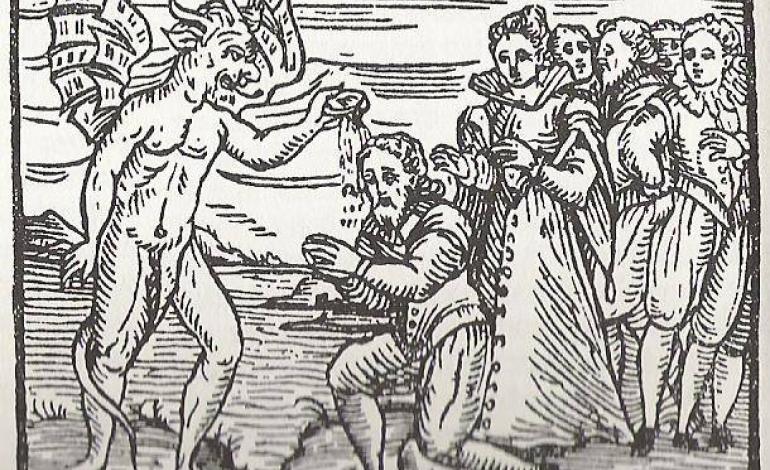 It is said that perverting Gods creations & doctrines is top priority on Satan’s list. That’s not something that is restricted to Lucifer himself however. All of the fallen angels (demons) have this priority in common, as they are forever angry w/God.

In a small percentage of paranormal cases that are malevolent, we may find that different perversions against things we relate with God or religion may be possible signs of demonic activity. There might be evidence that this demonic realm may be a mirrored one in many ways & opposite to ours. It is said demons can both speak and write backwards. As so when you play the words in reverse or look at their text in the mirror, (which it should be noted here that the writing may resemble that of a child as far as penmanship goes), it always has a more ordinary sound and look to it.

In Satanism and Black Magic, the “black witch/magician” will pride themselves on being able to speak backwards fluently. The belief here is that these demons hear it spoken in this manner to better receive commands, ect… And to better understand them as they speak. When Latin is spoken by the demons, it’s their way of mocking Jesus, whose primary language was that of ancient Greek/Latin. So they do it as a direct disrespect.

Another example of this appeared in the 70’s & 80’s, when “backwards satanic messages” were all a buzz. Vinyl records were played backwards to better decipher the messages. In the theology sense, there is evidence that the demonic realm, simply stated, is a backwards one. By nature, we consider the demon an opposite to good (an angel), as cold is to warm, as darkness is to light, as a positive is to negative.

A good example of this would be a rechargeable battery that goes dead in reverse polarity when the battery discharges as they come in proximity with it. Just like we can say the entity is simply drawing power to manifest. A demon doesn’t have to draw energy from its environment, but it will & it can.
When it comes to the demonic however, writing backwards is not always necessarily done as a display disrespect or anarchy to God. (Though much of what they do is.) What this more or less is on their part is “perspective judgment”.

For example, those demons of lower ranks are limited by both intelligence and wisdom in comparison to the higher ranking ones. These demons are also easier to run off using holy symbols and all things positive, as they creep closely to dark areas in the night, having repulsion to even brighter incandescent lighting. Not just natural sunlight. So it might be known that these lowering ranking demons have revealed a piece of information about when they interact with us in our dimension apart from their own. Picture how it would look from our end if we wrote messages backwards on a window that could be read by the person on the other side of it. This may very well be how they perceive our world for all we know. They are writing forward, yet to us it appears in reverse.

Just remember that these kind of cases are quite rare. If a paranormal team is investigating a haunting & some of these kind of things come up in an investigation (speaking of foreign languages, writings which are backwards, significance to certain numbers, scratches, ect…), then they may want to consult a respectable and responsible Demonologist to assess the situation & give a professional opinion as to the nature of the haunting.

It has been said that 10 to15 percent of all hauntings are demonic in nature. Of that 10 to 15 percent, most of those are location infestations, aposed to possessed people. Coming across someone who is perfectly possessed is probably the rarest pheonomen we will come across in paranormal research. Most will never come across it, & the ones that do will never forget it.