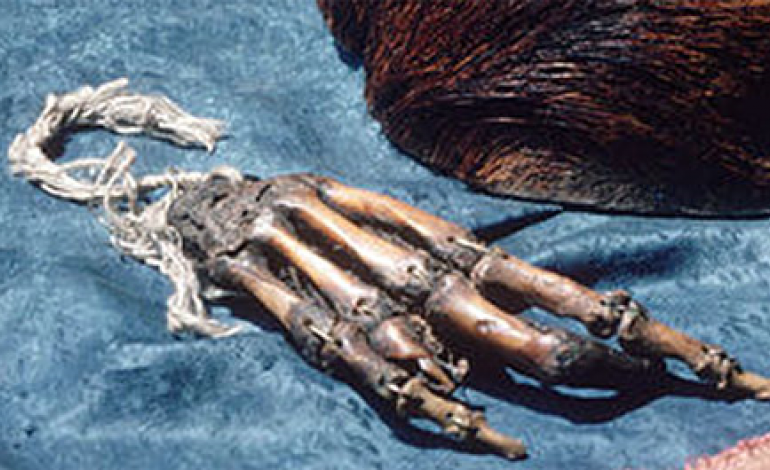 I have a bit of trivia for you. What does a Texas oil man with a cool name, an iconic American actor and the alleged mummified hand of a Yeti have in common? (Que Jeopardy now.) Give up? Perhaps the greatest conspiracy to prove the existence of the Abominable Snowman as well as the greatest comedy of errors in the history of the study of previously unknown and undiscovered creatures.

In 1957, Texas oilman and Adventurer extraordinaire, Tom Slick, first heard that the mummified hand of a Yeti was hidden away at a remote Buddhist monastery in Pangboche, Nepal. For centuries the monks of monastery worshipped and considered the hand to be a holy relic with divine attributes.

For years, Slick, led expeditions to the world’s largest mountain range, the Himalayas, in search of the most elusive of cryptozoological mysteries. A creature that according to science should not exist, the fabled Yeti. Slick knew the creature existed and when he heard of the Pangboche Hand he knew that he had to have it by whatever means necessary.

In 1958, Slick and his associates paid their first visit to the Pangboche monastery and inquired of the Yeti hand. The monks had absolutely no problem showing the men the object of their worship. After all, they believed they were showing the hand to honourable men with the best of intentions. They would soon learn how wrong they were.

When Slick was brought in the Sanctuary of the Hand, he knew almost intuitively that this was the real deal. The mummified hand of a Yeti. The hand was really nothing more than a few fragments of bone held precariously together by scraps of skin. But, the hand was easily twice the size of a normal human hand and certainly appeared to be something extraordinary.

After viewing the hand, Slick asked the monks if he could take the hand with him for scientific study. At his request, the monks became uncharacteristically enraged and demanded that Slick and his companions leave immediately and never return. To them the hand was something to be revered not buried away in the musty basement of a faraway museum. The monks feared that if the hand was removed their idyllic society would crumble.

When they left, Tom Slick assured the monks they would never return. However Slick had no intention of staying away and hatched a scheme to get his hands on the prize. A scheme that would make cryptozoologists the world over like shady characters.

A year after his initial visit to the monastery, Slick dispatched his good friend, Peter Byrne, to the Pangboche monastery with a less than honest goal in mind. Slick came to the conclusion that he didn’t need the entire hand, a few fragments of skin and bone should do the trick. And the monks of Pangboche monastery would be none the wiser.

I can’t help but wonder how the plan went down. Was it something as elaborate as Tom Cruise dangling from a rope a la “Mission Impossible?” Not hardly. Byrne waited for the monks to go to bed and slipped in as they peacefully slumbered. Upon finding the Hand, Byrne, clipped away a few fragments of bone and tissue and replaced them with the bone and skin of a normal every day man. And Byrne slipped back out leaving the monks to believe the Hand was intact for all to see.

Following his successful mission, Byrne smuggled the fragments across the border into India. Now all he had to do was get the fragments back to the States. To accomplish this feat, Slick called upon his friend and fellow Yeti enthusiast, Jimmy Stewart. That’s right, the Jimmy Stewart, star of everyone’s favourite Christmas movie. Stewart and his wife coincidentally were vacationing in India and jumped at the chance to have in his possession the remains of an actual Yeti. The scheme worked the fragments of the hand made it back to the States safely hidden away in Mrs Stewart’s makeup case. Slick had his prize and would soon prove the existence of the beast to the world.

One of the strangest heists in the history of the world had been pulled off flawlessly. Unfortunately for the Pangboche monks things were about to go from bad to extremely bad. In 1960, Sir Edmund Hillary and naturalist, Marlin Perkins, arrived at the Pangboche monastery to see the hand. Unlike Tom Slick, they weren’t there to prove the existence of the Yeti. They were there to debunk the monk’s claims. And upon inspection of the hand, Hillary, discovered that bones and skin were attached with string and wire and didn’t fit with the general makeup of the hand. Hillary, feeling vindicated in his scepticism, declared the Pangboche Hand to be a complete fraud.

When news of Hillary’s findings reached Slick he didn’t even attempt to have a scientific study done. Why bother, no one would take his word of Hillary and he committed the crime of stealing from a monastery and smuggling across international borders. Slick hid the fragments safely away with the secret of the crime hidden away.

For more than 30 years the Pangboche Hand was considered a fraud despite the best efforts of cryptozoologist, Loren Coleman. In 1989, Coleman discovered Tom Slick’s plot upon reading his archives. The whole bizarre affair cast a very negative light on the Texas oil man, making him look like a fool and a thief.

In 1991, the world was not through with the mummified hand of a Yeti. The NBC television program, “Unsolved Mysteries” received samples of the stolen bone fragments and tested them with the new method of DNA testing and the results shocked the world. The researchers came to the conclusion that the hand was “near human” and did not match any primate known to science. Tom Slick, who had long since dead was finally vindicated in his belief that the Yeti was indeed a real creature.

Following the findings of the TV show, 20th Century Fox planned on producing a comedy about the whole strange affair. Nicholas Cage, a celebrity who reportedly loves the unknown, was set to be cast as Tom Slick. I don’t know about you but I would pay to see that.