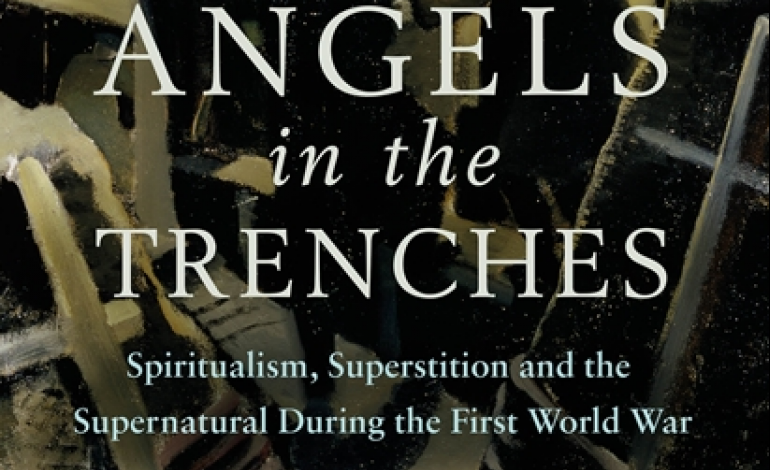 The unimaginable butchery of the First World War brought an unexpected and intense interest in the paranormal. People asked, could the dead return? Were the British on the side of the angels? Could black cat amulets and lucky pennies protect against bombs and bullets? Could the fate of nations be foretold?

In 2014, I started work as the editor of the Paranormal Review, the magazine of the Society for Psychical Research (SPR) – founded in 1882, it’s the world’s oldest and largest organisation for the study of what we now call the ‘paranormal’. Of course, 2014 was the also the hundredth anniversary of the start of the First World War and my first issue was devoted to looking at paranormal aspects of the conflict. And this got me thinking. You may have seen that WWI recruiting poster showing a father with his children and his little daughter asking ‘What did you do in the war, Daddy?’ Well, what did the SPR do in the war?

On the surface, there was not much to find – a few dusty accounts in mouldering journals, the occasional more recent publication – so I had to dig deeper. The work took me into special archives in the British Library and Cambridge University Library where I read letters and papers that did not seem to have seen the light of day in the last hundred years. There were original and unpublished accounts of the Angels of Mons, letters from Sir Arthur Conan Doyle. In the smell of old paper, faded ink and illegible handwriting waiting to be decoded was the raw stuff of history. Here was still a physical link with all that had gone. It was like entering a time machine.

I discovered that the SPR did quite a lot. They investigated angels, poltergeists and premonitions, among other things. Some members of the Society went to war themselves, others saw their sons leave for the Front, many never to return.

One of the most well-known members of the SPR at the time was Sir Arthur Conan Doyle. We’ve all read Sherlock Holmes, but how many have read, or even know about, his spiritualist writings? Conan Doyle was a member of the SPR long before the war started. He was also a believer in Spiritualism before 1914, but the tragic events of the war would lead him to make public his belief. And being Conan Doyle, he did not just make his belief public, he turned it into a crusade.

Another influential member of the SPR was the physicist Sir Oliver Lodge. He was Principal of Birmingham University and a Fellow of the Royal Society – an eminent scientist – and he was also deeply interested in the paranormal. When the war came, his youngest son joined up. What happened to him became the subject of one of the best-selling books of the war.

And then there was a fresh graduate in her twenties, an assistant research officer for the SPR, who found herself deciding the fate of angels when the SPR launched an investigation into the Angels of Mons. Did she sense at the time that she had in her hands one of the greatest mysteries of the First World War?

What I found fascinating was to follow these different biographies through the war years, seeing how events shaped or destroyed them. There were strange contradictions as society wrestled with the problem of the paranormal. Fortune-tellers were put on trial for fraud at the same time as the Army could stage a mass handout of lucky charms. A dramatic case like the Angels of Mons affected the whole country, but there were also so many individual encounters with the uncanny, with seemingly impossible coincidences or strokes of luck (good and bad). It seemed more than any other conflict to be a quintessentially paranormal war.

Now, in 2018, on the hundredth anniversary of the end of the war, the Centenary of the Armistice, I have told these stories, many for the first time, in Angels in the Trenches: Spiritualism, Superstition and the Supernatural During the First World War.

Angels in the Trenches was published on Thursday, 8 November 2018, by Robinson (an imprint of Little, Brown) in the UK and is available from Amazon and major booksellers. To find out more visit www.amazon.co.uk or www.amazon.com