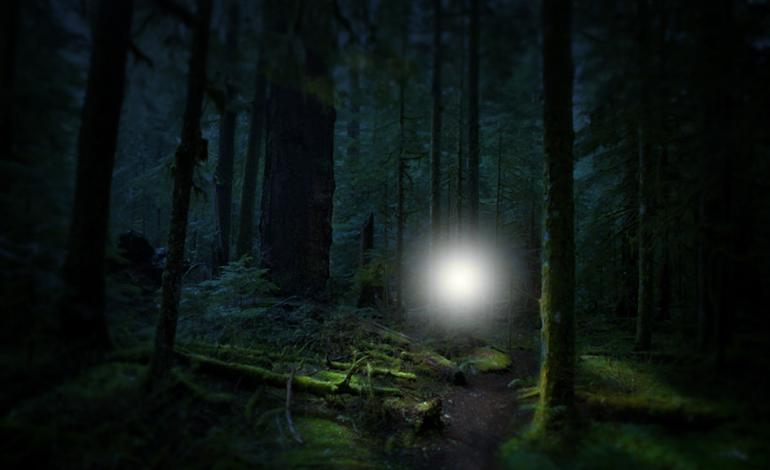 There is a mysterious location in the United States which has intrigued folks for several generations. The town of Paulding, which is an average small town in the upper peninsula of Michigan, is home to an interesting phenomenon which takes place just out of town.

Down a long gravel road which comes to an abrupt end, there is a rail guard placed right in the road to prevent anyone from driving past that point. From that spot on the road turns into a path which goes down a hill & eventually up another one on the other side, where the “Dog Meadow Lights” or the “Paulding Lights” can be seen.

The lights in this little valley can be seen as often as not. They are different colors & different sizes. They appear & disappear, & dance around at times. They are usually seen at a distance during the night, when the viewing is best, but not limited to.

People have been reporting the unusual lights since the 1960’s. The first documented account came from some teenagers who reported the phenomenon to the local Sheriff. Ever since then people have been throwing around theories including ghosts, swamp gas, geo anomalies, & inverted headlights (among other things).

There were two investigations at Paulding worth noting in the past. Both took place in 2010. One was conducted by Michigan Tech. They used a telescope to look toward the valley & onward past the horizon. They found that Hwy 45 was 5 miles down the way from the road rail where people usually park to see the phenomenon. They concluded that the lights were created by automobile head lights, tail lights, & even sirens which are somehow refracted & are visible from several miles away.

The only problem with this theory is that this doesn’t explain the lights when they are purple or green, nor does it explain how the lights are able to travel down this path which lines the valley, or the paranormal accounts from others who have claimed to experience anomalies, voices, & strange noises comming from the woods around the location.

During the same year SyFy’s television show Fact Or Fake also investigated the location, but came to a different conclusion. They had the State Patrol close down the highway in question to see if the lights would still appear…& they did. They also tried other things the Michigan Tech team did not try, including flying over the suspected area, yet they were unable to discern or explain what is causing the phenomenon.

Another question also presents itself; If this is caused by traffic, why do we not see this refraction phenomenon in more places than one location in Michigan?

Because of so many unexplained questions, we decided to go to Paulding one night to get a feeling of this location. It wasn’t a full scale investigation, more like just a walk along the path to assess things for a possible future investigation. Although we had heard dozens of stories about the location from people in the northwoods over the years, our paranormal society had not officially conducted a full scale investigation of the location. So we drove to Paulding to check out the lay of the land & to get some impressions.

Going to the location, one turns off the blacktop onto a gravel road which one drives down for a few minutes before the guard rail is reached at the end of the road where cars usually park. There are no houses. Just woods & a trail which continues on in the same direction where the road use to continue. We followed suit, parked the car, & walked around the entire location for almost 2 hours. There was still some snow on the ground. Not much though, as spring was almost upon us, but still present.

The light did make itself known. We could see it a few different times that night, sometimes present for multiple minutes at a time, going side to side as well as rising & falling slightly off in the distance. The two colors we noticed that night were red & white, which happen to be the two primary color of lights on a vehicle. The weird thing was there was never more than one light at a time, & sometimes the light lasted for several minutes, never coming & going like one would expect with auto lights. Plus we were there between 2am & 4am in the morning, so there shouldn’t be consistent traffic along a highway in a rural part of the country, certainly not at that time of night.

As we were leaving, although we were only there to scope things out for a possible future investigation, we had more questIons than answers. On one hand I could see why people might think the mystery lights are from cars 5 miles away, especially that night because the lights were off in the distance as we watched them. Plus like we noted, the color of the lights (red or white) that night were consistent to the color of vehicle lights.

On the other hand, people have claimed that the light comes up to the car, as well as displayed colors like green or purple, which aren’t car lights. Some also suggest the color of the light reflects the mood of the light.

As for the folklore, there is an alleged “ghost shack” in the woods which people have claimed to visually witness while walking one way, yet the shack is gone upon the trek back. Then there is the ghost of a train conductor who walks the path with a lantern, searching for someone or something. One can’t see the conductor, but one can see the light of his lantern bobbing up & down, swinging from side to side. Someone allegedly drowned in the area during the past as well. None of the folklore is verified of course.

Jenn sensed the ghost of a woman, & at least one shadow person in the woods around the path during her walk. But aside from that, along with a few odd sounds from the woods on both sides (& of course witnessing the light from a distance) the night was relatively uneventful. However, that was about to change…

We all got in the car to leave between 3:30am & 4am. No one else was around. We had just walked all around the premesis. Not more than ten seconds after we started down the gravel road to get back to the main road did a super bright light start to follow us out.

At first it looked like a motorcycle headlight, except there was no gravel dust or sound as it caught up behind the car within seconds. At one point the light was actually larger than any headlight from any automobile as it was literally right behind us. At its largest, it was around the size of a tire.

By this point everyone in the car was aware if this light behind us. The light almost seemed aggressive, like it was chasing us out. It did get quite close to us. I was in the back seat so I got a real good look at it. At one point l turned back around to say answer the driver who asked “who is that?” in which my reply was “l have no idea. We were alone”. & when l turned back to look at this light again, it was gone. Totally gone.

“Where did it go?” Jennifer asked. At that point we came up to the blacktop road. The driver never came to a complete stop at the stop sign because something was just chasing us & everyone was a little freaked out over this occurrence. We proceeded down the highway at that point dumbfounded at what just transpired. All this happened over the course of around a minute or two. Needless to say we discussed it on the way back home.

My first thought was it was a motorcycle, but it was still technically winter & no one was generally riding around on cycles yet. Plus no one was around as we were the only ones there. I don’t think it could have been a snomobile either because although the road was melted from snow by that point, there was still snow almost everywhere else except the road & the light was directly behind us on the gravel road. Besides, both of those vehicles are quite loud. And one of us would of heard something… which none of us did. And how did it just disappear? That’s the weirdest part.

So that was our unusual experience at the Paulding Lights. Is it possible the light followed us out? Because we never stopped the vehicle & got out, we will never know. Jenn didn’t pick up anything distinctive regarding the light itself as it followed us out either. We’ve heard that the light does come up to parked cars sporting various colors, including white, but as to following anyone out? Had the light had not disappeared behind us when it did, we would probably know what it was we were witnessing. But alas, that didn’t happen. We both think this was truly a bizarre experience. We can see why reports continue to persist.

One of our investigators had been to Paulding with a telescope recently (as we have not conducted a full scale investigation of the location yet) & confirmed that traffic on Highway 45 was infact visible with the telescope. However, she suggested there may be two things going on at Paulding instead of one or the other. Lights off in the distance may be caused by this refracted light theory, while all the closer stuff may be from some kind of land haunting.

Interesting thought. Could both oppsing theories be in play there? The road was closed down. There are endless stories from all those who have parked or gone there. Add the ghost shack & all kinds of stories which don’t support the refraction theory to the equation plus Jenn’s initial impressions from her walk, we know we’ll be back to Paulding in the near future to fully investigate this/these phenomenon(s) & document our efforts & findings. Peace & Blessings.