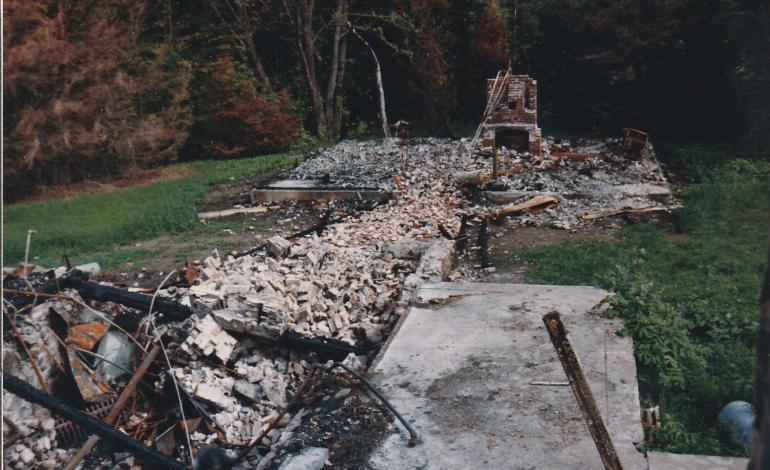 One of the most famous haunted houses of all time; The Summerwind Mansion, located on the border of northern Wisconsin & the upper peninsula of Michigan in Land O’ Lakes, Wisconsin finds itself at the heart of a mystery which has been in play for 29 years now… How did the infamous Summerwind Mansion truly burn down? Some new information has recently surfaced this month which may not only answer the question once & for all, but also leaves some serious questions which will have to be addressed.

What might be the most valuable outcome to this year’s National Ghost Hunting Day night time organized ghost hunting event brought forth a witness with an amazing claim during one of the paranormal gatherings participating in the national organized event.

The Fox Valley Ghost Hunters, a paranormal team from the Appleton, Wisconsin area were at the Summerwind Ruins participating in the national event with roughly 30 people present when a man approached the campfire crowd. What he had to say in front of the assembled collective left folks with their jaws dropped & wide eyed, & others speechless.

The individual (who has since asked our source to keep his identity anonymous) said that his uncle had lived in the property next door to Summerwind back when it burned down Father’s Day weekend of 1988. He said he was at his uncle’s visiting the week it burned down, a controlled burn by the fire department of Land O’ Lakes.

The witness claimed they were approached two days before the fire by some men from the town. The men said that if they saw a fire through the woods the following nights not to report it, because they were going to torch the buildings (the main mansion plus the servants building) to alleviate the issue of people constantly trespassing & partying at the haunted house.

The man said that the fire department showed up around 11pm two nights later (not at 7am the following morning of the fire as was the original claim) & ran a hose down to the lake. There were 3 fire trucks parked in strategic positions & they made sure the fire didn’t spread to the surrounding wooded area. When the witnesses (the guy & his buddy who was up visiting with him) seen the activity, the doned their rain gear, & approached the scene to bear witness to the event.

Bails of hay were placed in the middle of the building(s), then set ablaze. This is done so the building burns hottest in the middle, eventually falling in upon itself & into the basement. As the two men from next door stood there & watched the world famous building burn, an older individual walked up to them & said, “You know lightning hit this place, don’t ya?”, then simply walked away.

To this day, the official “story” claims that the fire department didnt show up until the fire(s) were too far gone to contain. But here is the kicker…the owners never gave the town permission to torch the place. In fact, the owner had bought the haunted mansion just a couple years prior because it was a world famous haunt. They had every intention on maintaining the location.

But the town was tired of all the police calls from various sources about all the trespassing happening on a consistent basis. Instead of going through the proper channels to deal with such an issue, they decided to take matters in their own hands & hoax a lightning strike. Actually, at one point the claim was made that lightning struck the place not just once, but twice.

Not only did the one time neighbours nephew share the details of what he personally witnessed, but he also provided pictures of the smouldering ruins to prove he was there. Upon seeing & hearing this from a first hand witness, an interview has been conducted by paranormal investigator Craig Nehring (Fox Valley Ghost Hunters/SRS) & one neutral witness (a former police officer) as the man recounted the entire account as to what he witnessed.

For almost three decades, there have been three primary theories regarding the Summerwind fire; 1.) lightening, 2.) high school kids burned it down, or 3.) The town torched both buildings. Although the newspapers reported that lightning struck the main building, there are several reasons why the lightning theory is not accepted so easy by some.

Also are the rumours that were spread around about the town being sick of dealing with policing the property from droves of high school kids from surrounding high schools partying there or people going there for a good scare. The irony is that the fire never stopped the traffic of thrill seekers & young adults from visiting repeatedly.

And now this development. Once we verified the witnesses identity, we decided this claim should be looked into further. The truth will stand on its own. The owners are also aware of this new turn of events, & will pursue this accordingly.

After 29 years, no police or fire report has been made available to the public or the Summerwind Restoration Society. Those would certainly be interesting to see…if there are any. If the town is truly innocent, they should have no issue cooperating. If they are guilty, then morally speaking perhaps they owe the owners of the Summerwind Ruins a new mansion.

Although there is more circumstantial evidence than ever pointing to the township being involved in some way, we feel more needs to be done to put this 29 year old mystery to rest. More witnesses or information could lead to the real truth of the matter.

If anyone had any information or evidence regarding the origins of the fire, whatever they are, perhaps they may finally came forward after all these years. When the witness was asked why his family didn’t say anything before now, he said that back in the day his family needed a septic permit & didn’t want trouble from the town in the obtaining that. His uncle later sold the lot in the 90’s & the matter was put out of his mind after that…until now.

We use to believe high-school kids were more likely responsible. Now we’re not so sure. A newspaper clipping reported that some in the town were tired of dealing with the haunt, but couldn’t obtain a permit to condemn it. Did the town loose patience? & how do they know it was lighning? Is it speculation or is there physical proof?

When Craig Nehring, the president of the Summerwind Restoration Society, was asked about his thoughts pertaining to his interview with the witness, he stated, “More investigating is now warranted with the new accusation, perhaps this time from an outside source with no conflict of interest. What we want is the truth once & for all.” Hence the mystery continues, as well as the questions.

Here is the link to the incredible interview;