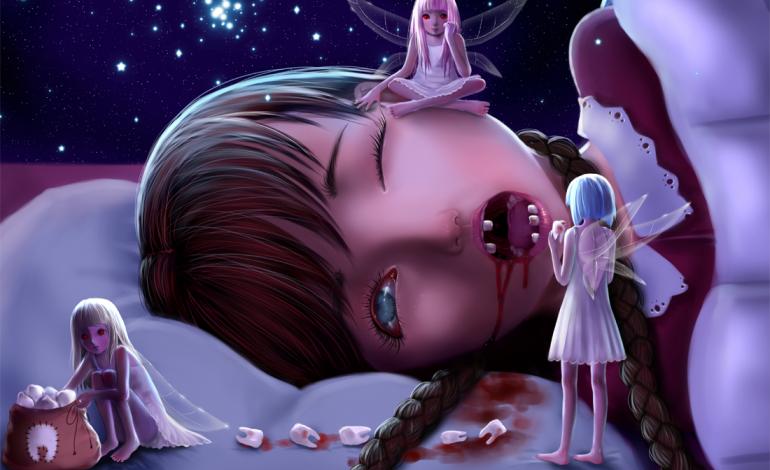 Possibly one of our more creepy fairies in Western folklore, The Tooth Fairy is indeed a somewhat dark character with an unending need for human teeth!

But where does this story come from?

200 years ago in Europe we were simply burying teeth when they fell out. Simple, practical and not in the least bit macabre. But at the same time in France, a story appears in which a queen hires a mouse to hide under a bad king’s pillow in order to knock out all of his teeth when he is asleep. This is where I believe the tale begins, although from there, the story has been somewhat transformed.

Today in Spain there is a tooth mouse named Ratoncito Pérez. He visits in the dead of night and replaces the tooth for sweets (ironically!) or money.

Likewise in Italy the Topino (little mouse) is believed by children to be their late night visitor. French children also get visits from the tooth mouse, or La Petite Souris.

Interestingly, there is no Tooth Fairy in Germany – children instead collect their teeth in a container called a Zahndose. There is no real reason or purpose to the collection; they are usually just kept locked away by parents. Filipino children bury their teeth in order to make a wish, unlike Turkish children who watch as their parents bury the teeth. A rather sweet, although macabre idea comes from Chile where children have their teeth made into charms bracelets or necklaces. In Greece, kids throw their milk teeth at the ceiling on their bedrooms. They then recite a little rhyme which translates along the lines of “Take my tooth and give me one made of iron so that I can chew rusks.”


In Japan, children tend to throw their teeth straight up into the air as a request to the gods for straight teeth. I wonder if it works? This is similar to the practice in Asia of children throwing their teeth at the roof while shouting out a request for strong healthy teeth for their whole lives.

Closer to home, in some parts of Scotland, we hear of a “fairy rat” who does the rounds. So it’s clear from these cultural practices, that teeth are very valuable and prized items.

But I wonder, why are we are instructed to put those precious pearls under our pillows so that we can trade them in for hard currency? Is this just another way of materializing part of Mother Nature’s magnificent tapestry of life?

And why only baby teeth?

How about if we lose teeth through an accident as an adult? Does the tooth fairy or her cultural equivalent not deem these teeth worthy of payment?

For me, the ultimate question above all others when considering this fabulous legend is what does the Tooth Fairy DO with all those baby teeth once purchased?

I want to understand the potential motivation of this Tooth Fairy if there is one.

A castle made of teeth? Creepier and creepier! What kind of ‘fairy’ would this be? Visions of the San Bernardino alle Ossa church in Milan spring to mind, with its walls of stacked bones. Surely horrific. Now e come to the second most popular theory, that of teeth becoming stars. Now on the surface that actually sounds quite sweet, but are we now laying foundations for later confusion? Fast forward to a science lesson in our little ones future. “So class, does anyone know what a star is?” “Yes Sir, teeth”. Once the rapturous laughter dies down I think we’d have one very embarrassed youngster.

I’m all for a good urban legend, or myth from the realms of fantasy but I do like there to be at least a point to the tale, or some element of believability however fantastical that may be, and yes while I will inevitably buckle under the social pressure to collude in this allusion when the time comes for my own children to excitedly place those little pearly whites under their pillows, I will do so under slight duress.

After all, I am the 9 year old girl who one day found a pot on her mother’s dresser containing all of the teeth apparently paid for by said Tooth Fairy. My immediate thought was that she must have returned them for not being quite good enough and my parents didn’t want to upset me…dilemma upon dilemma!

But let’s for one moment pretend all is well and all is true…what do YOU think the Tooth Fairy does with all those teeth?