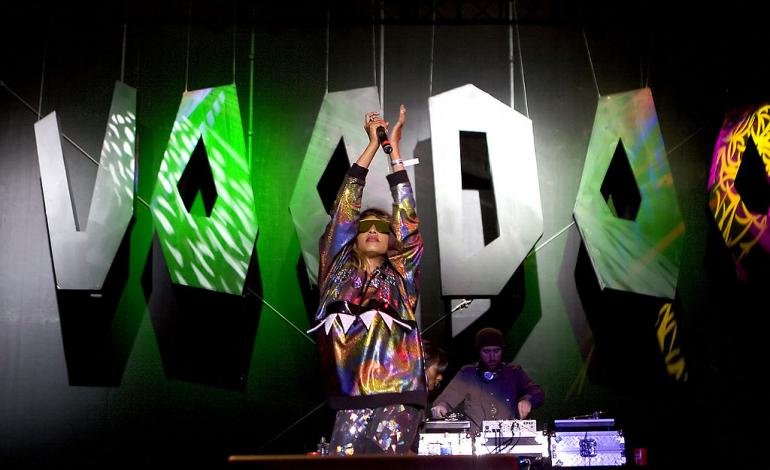 New Orleans is one of the most mysterious cities in North America and home to one of the most feared religions in the world….Voodoo. Most people associate Voodoo with what they have seen in movies. The Hollywood version depicts black magic complete with not only animal but human sacrifices. Images of sticking in pins in dolls and zombies rising from the grave come to mind for most familiar with the stereotype.

The real Voodoo is a religion that has been in New Orleans for over two hundred years. It arrived in 1803 via Haitian immigrants who settled in New Orleans as free people of color. A slave uprising in Santo Dominque (now Haiti) drove many to leave their home. These wealthy newcomers owned their own businesses, plantations, and their own slaves. The first Voodoo Queen, Sanite’ DeDe held rituals in her courtyard on Dumaine Street, just blocks away from the Cathedral. The drums from rituals could be heard in the cathedral during mass. In 1811, the church decided that any religion that was not Catholic would not be allowed to practice within the city limits. The Voudouns were forced to hold rituals in Congo Square, there the tradition mixed with other slave tribe religions and Native American customs. Due to constant harassment and raids by the local authorities, eventually these religious ceremonies were held in secret on the outskirts of the city along Bayou St. John. Shrouded in mystery & superstition, New Orleanians developed a fear of Voodoo.

The most noted Queen of Voodoo in New Orleans was Marie Lave au. She was born in 1783, to a wealthy plantation owner, Charles Lave au and his wife, Marguerite Darcantel. She was a hairdresser who in 1826 began to study herbs and the secrets of the religion. She quickly rose to popularity among New Orleanians for her benevolent care for the sick. She used her knowledge of roots and herbs to help those who needed healings. In spite of her attraction to Voodoo, she never abandoned her Catholic roots. She incorporated the use of candles and Holy Water in the rituals. It was because of this “blending” of religions that the white creole Catholics began to find Voodoo a bit more palatable.

She retired as Queen in 1875.Although throughout her reign she was feared by many, when she died at the age of 98 in 1881 some believed that she was a saint. Her life was embodied with rumors and gossip set off by superstition. She is buried in St. Louis Cemetery # 1.Thousands flock to her tomb to make wishes and leave offerings of thanks making her the second most visited tomb of all America. When she retired, her daughter Marie II became Voodoo Queen. She commercialized voodoo opening a shop on Bourbon St where she sold roots, herbs and spells, she was best known for her love spells. When she took over, a voodoo frenzy gripped New Orleans that lasted almost 100 years.

New Orleanians feared nothing more than the dreaded Voodoo curse! It was considered to be the worst of all fates. By the 1860’s, Voodoo had become very political. There was much competition to be the Queen or King of Voodoo. No doubt at this time some practitioners began to prey on the fears of others to profit. It was not uncommon for crosses of death, tiny coffins, and strange concoctions to be found at dawn on the doorsteps of residents. Sometimes there would be nothing more than a black candle or a black crepe wreath. Superstitious residents of the times would constantly seek protection or removal from such curses. Needless to say, there was big money to make in uncrossing cursed conditions.

One of the more common charms used to ward off evil was the gris-gris bag. Much like a Native American medicine bag it would be worn near the body or placed in the home. In a 1924 newspaper article, doctors at Charity Hospital who were interviewed told of patients being brought in wearing their gris-gris bags and refusing to part with them. These bags were usually made up of a variety of herbs or even animal parts. One of the most powerful animals to use in Voodoo was the cat, particularly, a black cat. Many of the incidents considered Voodoo crimes that we found in the police reports were actually crimes committed not so much because there was a curse but merely the belief that there was.

In October of 1962, in a quiet neighborhood near the New Orleans lakefront, a woman found what appeared to be salt on her doorstep. Salt is actually very cleansing and is used in Voodoo to ward off spirits. The woman did not know what it was or what it meant. She ruminated over the substance throughout the day convincing herself that her husband was trying to put a hex on her. By the time he arrived home from work that evening, she had become so hysterical that she shot him in the head as he entered through the door. She was eventually convicted for shooting her husband with the intent to murder him. Fortunately for him, he survived the attack.

On November 2, 1950, neighbors called the police to an apartment inside 808 Dauphine Street. The neighbors complained that they heard the screams of children within. When the police arrived, they found the mother, Rosita Zerruda, in a crazed frenzy attempting to burn down the building by dousing it with kerosene. She was arrested before she could ignite it. The woman had deep gashes in her arms that were obviously self-inflicted. A thick trail of fresh blood led police to a bedroom where her four children lay in pools of congealed blood, gashes down their forearms. The family was rushed to Charity Hospital. The children were treated for their injuries and eventually released into the custody of a relative. Once treated for her wounds, Rosita Zerruda was then admitted into the mental ward.

When questioned by police, Mrs. Zerruda hysterically explained that her neighbor had cursed her. She stated that the woman had been hypnotizing her and then had placed a spell on her. She informed police that when she awoke that morning, she found blood smeared on her doorstep, along with a black wreath. Police never got any more information out of Mrs. Zerruda. During her questioning, she began to stutter, and her pupils dilated. She mumbled senselessly as her skin grew pale and clammy. Her body began to twitch and her pulse weakened. The police stood and watched in horror as doctors attempted to treat her for shock. Mrs. Zerruda slipped into a coma before their very eyes. Never awakening she remained a vegetable for the duration of her tormented life!

Was she truly cursed? Or perhaps did the power of her own belief create for her a self-fulfilling prophecy? Magic is nothing more than thoughts, beliefs, or desires that we propel out into the astral plane. Every thought form must eventually manifest on the physical plane. The stronger the belief and the emotions set into this action, the faster the manifestation. Call it what you will; magic, power of intent, or positive (or negative) thinking, it is all the same. What we believe truly is. If one believes strongly enough that he is cursed, he will create a curse existence. And if one believes strongly enough that he will die, he can literally destroy his own life.