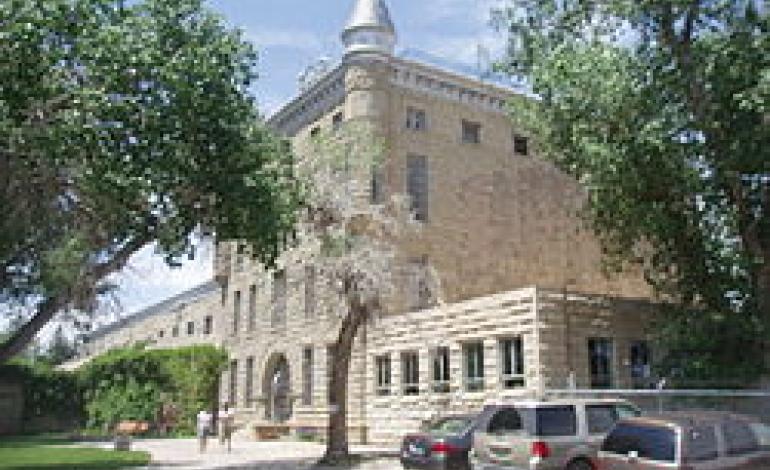 If you should ever travel west of the Mississippi River and find yourself in Wyoming, be sure to pay a visit to the Wyoming Frontier Prison in Rawlings. A correctional facility believed to be the most haunted in the State.

Built around 1900, Wyoming Frontier Prison, The Old Pen, was built as a facility to imprison violent offenders on their way to the gallows or the gas chamber. Since closing its doors as a prison, The Old Pen, has become a favourite for tourists and ghost enthusiasts seeking an experience with prisoners who have long since gone on to their final reward. The prison, which embraces its haunted history, goes so far as opening its doors for corporate Halloween parties.

Employees and tourist alike, claim to have interacted with spirits that suddenly appear and vanish before their eyes. Others have reported the overwhelming sensation of being watched and foreboding as the walk through the once hostile environment. Some visitors, so overcome by this feeling have run out in terror believing they were being chased from the premises.

Of all the inmates believed to still haunt The Old Pen, the most famous and gruesome inmate who met his fate in the prison’s gas chamber was a young man named, Andrew Pixley. In 1945, Pixley committed the unthinkable crime of murder and cannibalism when he slaughtered an entire family from Chicago on a ski trip. After killing the parents, Pixley, kept the two girls prisoner for his own sick pleasure. After violently raping and mutilating them, he finished the horror by chopping them up and eating them.

When Pixley was finally apprehended by authorities he claimed to have no recollection of the twisted affair. However, the State of Wyoming would have nothing to do with such nonsense. After a short recess by a jury of his peers, Andrew Pixley was found guilty and sentenced to death in the gas chamber. It wouldn’t be until 1965, twenty years later, when Pixley was strapped into the gas chamber and finally put to death for his depravity.

Employees of the prison claim that the spirit of Andrew Pixley still roams the prison. Many refuse to go anywhere near the cannibal’s cell believing the picture of the young man that hangs over his bunk watches them, claiming his cold, dead shark eyes watches whoever passes. Others have claimed to hear his voice from beyond the grave confessing his crime as he laughs.

Although, Pixley’s spirit may be the most feared and experienced, other spirits are seen. Some appear to just be tape recordings, a psychic imprint in the environment; they go about their business without a care. While others are all too happy to interact with living right before they vanish.

And lastly, our journey into the dark underbelly of spirit infested correctional institutions, we come to the State of Delaware and the innocently named, Pea Patch Island. A place of so much death and destruction and ghosts even brave American Soldiers feared to sleep at night.

When approaching Fort Delaware at Pea Patch Island, one cannot help but feel the power of American history. Used as a prisoner of war camp during the Civil War, it was used to imprison captured Confederate officers. Unlike Andersonville, POWs at Fort Delaware were not subjected to the horrors typically associated with internment camps. And although, being imprisoned at Pea Patch Island was relatively comfortable, that did not stop violence was occasionally breaking out.

When a soldier is taken prisoner their first duty is to use whatever means necessary to escape their captors, which often led to deadly conflicts between guards and prisoners. Many executions and suicides occurred behind the Island’s imposing walls, resulting in the many trapped souls still begging to be set free.

From the end of the Civil War to the beginning of World War II, Fort Delaware’s phantom population remained as silent as the structure that held then tied to Earth. But, when the island was used as a lookout station by the US Army hunting Nazi Submarines, it was during this time the ghosts of Pea Patch Island made their presence known.

American Soldiers stationed at Fort Delaware at Pea Patch Island, often reported hearing disembodied voices and screams all over the Island. While on watch it wasn’t uncommon for a soldier to report witnessing wispy apparitions or seeing the spirits of Confederate soldiers in full uniform appearing and disappearing at will. Although many reports paranormal activity were filed by soldiers, they bravely stayed until the war ended and Nazi Germany was no longer a threat to the security of the East Coast.

When Fort Delaware reopened in 1951 as a State park, the spirits were just as active as they were a few years previous. One tourist in the mid-1980s, managed to capture the image of a Confederate soldier in full uniform standing in a doorway. When the tourist contacted the park service about the reenactor their response simply was, what reenactor. This tourist was lucky to capture the most coveted of all paranormal evidence, a picture of a full body apparition.

Pea Patch Island may be a place of extreme paranormal activity, the place that really sends chills down the spines of visitors is the Fort’s dungeon. Those bold enough to go into the dungeon of the Fort tell stories of diseased looking apparitions chained to the walls and the pitiful voices of prisoners begging to be set free from their bondage. Needless to say, Fort Delaware at Pea Patch Island delivers on the scares.

Prisons, jails and penitentiaries are not theme parks. People are not sent there for a good time. People are sent to these places because they broke the law and need to pay their debt to society. They are places of punishment and because of this violence can break out resulting in the many lost souls who find themselves locked up for all time.