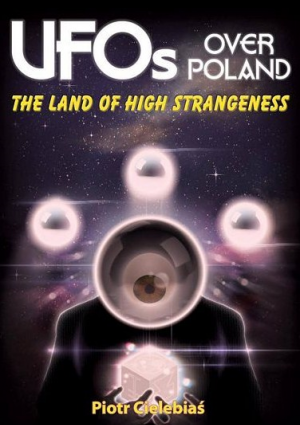 UFOs as we know are a global phenomenon and although there have been one or two books written about UFOs in Poland there has not been one book which has comprehensively covered the full shooting match. Well that was until now! This book has it all, from historical UFO sightings, wartime UFO reports, Polish alien abductions, pilot encounters, Polish UFO Crashes and much, much more. Quite an astonishing book this one and one in which I personally found totally fascinating particularly so for the immense amount of data that the author provides and most of which that has never been published in English before.

Admittedly the author does refer to other Polish researchers work throughout the book but in the main it is the author’s bringing together such a wonderful amount of high strangeness cases that one wonders what is coming next. These are not simple lights in the sky, the cases that the author refers to are in the main, low level, close proximity sightings which when you read them clearly show how traumatic some of them were to the watching witnesses. Piotr Cielebias begins his book by bringing the reader up to speed with some historical Polish UFO sightings. What I found of particular interest was when the author states (page 4) that the Catholic Church was responsible for the cultural and historical holocaust of the Polish identity! The author further states that in the main, anomalous aerial phenomena were first recorded in the medieval period. Indeed he refers to the last great Polish King, Jan 111 Sobieski (1629-96) who whilst engaged in a battle with the Turks saw a strange aerial phenomenon. But as far as the first so called modern era of Polish UFO accounts go, that would (according to the author) appear to come from the 19th century where again a number of strange things were seen in the skies above Poland.

The book is peppered with many bizarre and anomalous sightings and I found the Nowiny landing of 1943/44 very intriguing to say the least. I won’t go into detail here as it is for you to buy the book and see for yourself, but yes, quite an astonishing case. Poland, as we know, suffered many losses during the second World War and during that terrible conflict, Polish citizens and airmen were privy to witnesses what has been called ‘Foo Fighters’ those balls of light which tailed military aircraft from all countries during the war, the author illustrates a number of these strange Polish sightings in the book.

It wasn’t until the 1950’s the author tells us, that the Polish media (which was still controlled by the state) really began to inform its public about UFOs, and it pains the author to state, that even today no Polish politician has ever commented publically about the subject of UFOs. There are a number of UFO photographs and illustrations throughout the book which always helps the reader to see for themselves exactly what people have been seeing in the skies above Poland.

The subject of UFO crashes is also looked at in this book. As a reviewer, I always find it difficult to believe in such crashes mainly based on the fact that if we are dealing with a highly superior advanced civilization that are visiting us here on planet Earth, that their machines would crash, but, having said that, stranger things have happened and maybe there is a reason for this! The author brings to our attention a UFO crash that happened near Gdynia back in 1959. Was it an alien craft that fell from the sky or something else? Buy the book and find out! Some of the very close encounters cases that I read about in this book just blew me away not just by the accounts themselves, but by the actual craft that these beings came in! For instance the Jan Wolski case of May 10th 1978 we are shown an illustration of a craft that one would suggest all day long cannot fly but again, do we really know what we are dealing with? The author also takes a long hard look at some of the sensational humanoid accounts that have come out of Poland throughout the years and boy the reader is sure in for a surprise and numerous jaw dropping cases are presented (including the Czerniakow landing of 1979) The author tells us that a study of a number of Polish scientists back in the late 1960’s were of the opinion that the UFOs seen in the skies above Poland were simply the result of the Soviet Union testing things of a military nature. There is of course an element of truth in this, but certainly not all Polish UFO sightings were the result of the Soviets testing missiles etc. One of the more intriguing stories that I came across in this book, was a case where a UFO blocked an ambulance on the road which was carrying a woman to hospital to give birth, (I kid you not!) Furthermore there is also an account of a mother and son being assaulted by a flying saucer! (I did say that this book was astonishing!)

As in most countries, Air Force pilots are usually forbidden to discuss their own UFO sightings. Polish protocol states that they can report their encounters to their superiors but certainly not to the mainstream press, thankfully the author brings forward a number of very interesting pilot encounters for your attention. One of which the pilot was ordered to shoot the UFO down. The author also looks at civilian pilots and their UFO sightings. But it’s not just the air force that have had their UFO sightings, the military have as well and again the author brings forward some cases in respect to this (see the Nadarzyce Incident of October 1944) As I have stated, this book is full of amazing UFO encounters are the chapter on mass UFO sightings was an eye opener for me, (see the Piechota and Rzepecki sightings of August 20th 1979) The author then hikes the reader’s attention up with the amazing incident which occurred at Bedzienica-Nockowa, this really is a high strangeness case which involves UFOs and humanoids peering out from a luminous screen. As most UFOlogists know, car stop cases are a big part of UFO lore where the car engine dies in the presence of a UFO, again a number of such cases are given here.

Of course officialdom comes in many forms and the Polish police UFO reports are given the once over. The author tells us that little was known about Polish police officers UFO sightings prior to 1989 but thankfully as research progressed, these cases are now coming to light. What I also found of great interest whilst reading this book, was the UFO cases over the Baltic Sea but more importantly the USO reports, (Unidentified Submersible Objects) that my dear reader, takes this fascinating subject to another level and one in which this reviewer is totally immersed in! There are some wonderful accounts of USO activity here in this book. Sadly the UFO enigma has a side to it which is most unsavory, and that is UFO abductions and the author takes stock of a few of them here in this book where bedroom visitations are looked at. Yes, definitely not a side of UFOlogy that I as a reviewer of this book is happy with.

A number of different authors around the world have told us of certain ‘anomalous zones’ where a higher concentration of UFO reports and other bizarre things occur, well yes Poland too has a few of these zones. The small town of Glinik near Rzeszow has seen its fair share of UFO and humanoid activity and I guess is the Polish equivalent of Bonnybridge which is a small town in Central Scotland. (Rzeszow is another Polish UFO zone which has seen its own fair share of the weird and the wonderful) I did say that this book has everything and it even covers, (would you believe) flying humanoids! Yet again a few cases are discussed here. The author also looks at consciousness related UFO cases where he draws the reader’s attention to the very fact that some UFOs would appear to control the witness and some quite alarming cases are presented which certainly makes you wonder what on Earth is going on. Quite frightening actually.

The author does accept that not all UFOs may come from deepest space, he is of the opinion that there is a lot of truth in what French UFOlogist Jacque Vallee has to say in that maybe we should be looking at dimensions as part of the answer to the UFO enigma and the author quite rightly states the fact of how wide and diverse the UFO subject really is, from the shape and size of the entities seen, to the many different and varied UFO craft that have been seen. And what about the direct lack of contact? All this the author states, makes him wonder that the UFO subject is not as cut and dried as we would like to think it is.

All in all I found this a most fascinating book and a book which I have already stated has it all. This book clearly shows that Poland as a country has also been touched by the UFO presence and has a rich history of weird and wonderful events. The author has done a marvelous job in bringing all the best cases to our attention and believes you me; you won’t find a better book on Polish UFOlogy (or UFOlogy in general). A cracker, get it on your book shelf NOW. A big thank you should also go to publisher and UFO researcher Philip Mantle as this is his first venture into the publishing world.